It has been a sticky situation on   this past week.

In fact, sticky is an understatement. Environmental protesters literally glued themselves to doors and walls of subterranean passageways that link the House office buildings with the U.S. Capitol.

The demonstrators glued themselves to areas with a substance, which is like Super Glue or Gorilla Glue,  to walls and doorways. They would not reveal what glue they used because then police or the fire department could possibly know what to use as kind of antidote to use to unglue them.

Yes, folks, they glued themselves to make their points.

The protestors also draped yellow caution tape around their bodies and draped themselves in signs and declared that the tunnels were closed.

When lawmakers were called to the floor to vote on Tuesday night, the protestors ranted on and lawmakers were forced to listen. Members of the House had to contort their bodies around the glued protestors to get to the Capitol.

Emergency crews worked diligently and eventually unglued the protestors and were able to arrest 17 persons and charged them with crowding and obstructing. Police charged another 15 with resisting arrest. 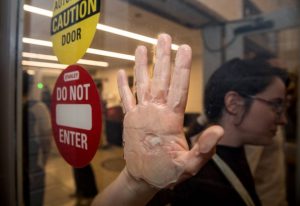 Large hand-prints remained on several doors in the basement of the Rayburn House Office Building after the protestors were long gone, accompanied by police.

Leaving finger prints can cause police to break a case wide open but in this instance no one was caring about leaving evidence. In fact, entire hand-prints left a lasting memory.

I write for http://DefiantAmerica.com, http://aleadernotapolitician.com/ https://magamedia.org/ and http://FreeAmericaNetwork.com & Graphic Artist & Video producer. I adore journalism. Politics seems to be my preferred genre although I do not hesitate to write anything that strikes me as interesting. Researching and finding 'Breaking News' makes my blood rush. I've written seventeen books. and over that including books in conglomeration with others. Doing graphic art design has always been fun for me. Sometimes I incorporate this talent into my articles or when a special 'feature picture' is required. You can find me tweeting on: https://twitter.com/DavedaGruber You can always find my articles on the sites I write for.
View all posts by Daveda →
Tagged Capitol Hill. Bookmark the permalink.