Biden Thinks He’s Running for the US Senate 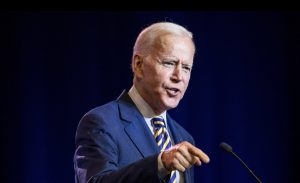 Former Vice President Joe Biden forgot that he was running to be the Democratic nominee for the presidency and instead told people that he was a Democratic candidate for the “United States Senate.”

Biden, along with other 2020 candidates, attended the South Carolina Democrat Party’s First in the South Dinner. It has been reported that the former VP received a rather long ovation. As a matter of fact, the longest out of all the candidates.

Biden must have been in his glory because he feels that he’s got South Carolina locked up for his first win because he hasn’t won a primary in any state yet.

South Carolina has been Biden’s “firewall” after losing primaries in Iowa,  New Hampshire and Nevada.

But Biden can’t seem to remember things and it results in gaffes that continue to make people, who are voters, re-think their options.

When Biden was wrapping up at the dinner, he forgot which office that he was actually running for.

Biden was begging the voters for their support and said, “You’re the ones who sent Barack Obama the presidency. And I have a simple proposition here: I’m here to ask you for your help. Where I come from, you don’t go very far unless you ask. My name’s Joe Biden. I’m a Democratic candidate for the United States Senate. Look me over. If you like what you see, help out. If not, vote for the other Biden. Give me a look though, okay?”

This is so sad.

Here @JoeBiden says to the crowd in South Carolina that he is “running for the United States Senate” and that if they don’t like him they can “vote for the other Biden.”

I honestly wish he would’ve retired & not subjected himself to the rigors of this campaign. pic.twitter.com/mygFnsrdjC

Biden has been a senator in the past but he’s not running for a Senate position now. The man wants to be President of the United States and apparently forgot.

These past weeks have not been kind to the forgetful Biden. He had voters wondering about his claim to have been arrested in South Africa trying to free Nelson Mandela from prison. It was the first time for that story and there are no facts to substantiate it.

Biden also got confused about his late son Beau’s position and told CNN that the deceased son had served as U.S. attorney general. I fact, Beau Biden was attorney general for the state of Delaware from 2007-2015. He was never a U.S. Attorney General.

In a way, it would be kinder if Biden didn’t win the state of South Carolina. Maybe that would make him get out of this race and stop making a fool out of himself.

It is starting to look sad to see an old man struggling to remember key facts.