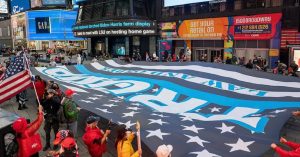 New York City has never been known to be a Republican city and in some ways it is known as a very liberal place.

On Tuesday New York City experienced something a little different for those who make the city their home. For anyone who happened to be in the area of Trump Tower on Fifth Avenue and through Times Square in the Big Apple around 3:30 PM, they got to see the world’s biggest Trump flag.

The 75-foot-by-50-foot flag was carried by President Trump’s supporters as part of a demonstration, and yes, it was peaceful.

The giant flag displayed the words: “Trump: Law and Order.”

People from the group marched and chanted “Four more years,” “Whose streets? Our streets” and the Pledge of Allegiance.

There were several videos of the demonstration posted on a Facebook page that uses the title “OperationFlagDrop,” which has an impressive nearly 140,000 members. The page is meant for users to share pictures of Trump 2020 flags and banners.

One of the President’s sons, Eric Trump, thanked the crowd for their support of his father on Tuesday afternoon.

We love all of you so much! If I was there today (I’m campaigning in Michigan and Minnesota) I would come down and give you all a big hug! Thank you for the support of @realDonaldTrump

Can the state of New York turn RED? That would naturally be a great accomplishment.

Rural New York State is not the same as New York City when it comes to voting.

Republicans carried rural and some suburban counties, but Democrats lead in great numbers in New York City and the upstate population centers, which leads them to election victories.

In 2016 the same story held between the two home-state candidates for president, Democrat Hillary Clinton and then Republican candidate Donald Trump.

Clinton won New York with 58 percent of the vote, while Trump still pulled in 37 percent.

Have the residents in New York City had enough of the violence that has erupted there lately? I’m pretty sure some have.

Are some residents of Manhattan fed up with Bill de Blasio and his alleged siding with the “Black Lives Matter” movement? Maybe they’ve had enough of destruction and violence.

I’ve always felt that no one should take for granted what a free people will do or how they will vote in any given election.

Some people believe that promises that are made should be kept.

President Trump has kept his promises that he made during his campaign in 2016.

I write for http://DefiantAmerica.com, http://aleadernotapolitician.com/ https://magamedia.org/ and http://FreeAmericaNetwork.com & Graphic Artist & Video producer. I adore journalism. Politics seems to be my preferred genre although I do not hesitate to write anything that strikes me as interesting. Researching and finding 'Breaking News' makes my blood rush. I've written seventeen books. and over that including books in conglomeration with others. Doing graphic art design has always been fun for me. Sometimes I incorporate this talent into my articles or when a special 'feature picture' is required. You can find me tweeting on: https://twitter.com/DavedaGruber You can always find my articles on the sites I write for.
View all posts by Daveda →
Tagged Eric Trump, New York City. Bookmark the permalink.