Something has been bothering me and so I’ve been researching and I feel that I’ve just uncovered something rather interesting.

I’m not one to believe in conspiracy theories but when I get bothered by something, I have to investigate it. That’s my nature and I can’t change the way my mind works.

I saw the picture of Jeffrey Epstein dead on the gurney. I know that it was confirmed that Epstein was “dead on arrival” to hospital. That concerned me. If he was dead in the picture, his mouth would be open, right?

After death the body becomes completely limp and relaxed, and at this point, the mouth naturally falls open (in the same way it does when you are asleep in the chair).

So someone finding you five minutes after death would find you lying there with your mouth open. After a couple more hours, rigor mortis begins, and then your muscles become rigid. At that point, it’s quite difficult to get the mou 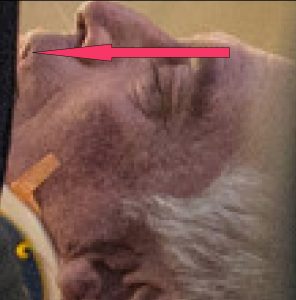 I have seen dying or deceased (dying from medical causes in the hospital) people who died with their mouths open due to lack of muscle tone. When you die, your muscles all relax. Your mouth falls open because the muscles are no longer taut to keep it closed.

Funeral attendants, where the deceased is to be displayed in an open casket, will deliberately close the mouth with a clip or stitch so that it looks more natural.

If Epstein was dead in the picture, his mouth would have been open.

I blew up the portion of the picture, where you can see a portion of his top lip, where Epstein is supposedly “dead on arrival” to hospital.

Any picture will get distorted at some point when you enlarge it to a stage where it is no longer in focus. But in this picture the distortion is in a particular spot.

You can see the distortion of the pixels on the top lip. The picture was, as I allege, carefully altered in that spot. Why? No one wanted anyone to see that his mouth was not open. To some it would mean nothing but to others who are in the know, it becomes obvious.

Epstein was unmarried and does not have any known children. It would appear that his younger brother Mark would be his next of kin and really the only close living relative. His estate is up for grabs but it is being said that Epstein’s money/assets will be tied up for many years.

Epstein had an awful lot of money in cash and in properties and airplanes and other things like artwork and his private Island, “Little St. James, in the United States Virgin Islands located off the east end of St. Thomas in the Caribbean Sea.

He had a reportedly had about $500 million dollars but that is only what was on paper that could be found. Epstein’s net worth is rather difficult to pin down.

Epstein’s Palm Beach estate alone is estimated to be worth over $12 million.

A court filing from the United States government and a filing by Epstein’s defense team both stated he owns six properties, along with other personal property. He appears to own the holdings through several shell companies named after trees. Some are:

Epstein’s money goes through a labyrinth of companies. It’s actually quite difficult to get accurate information.

This makes tracking Epstein’s fortune quite difficult. He may have money in many countries and he also may have another or many more residencies in other countries.

The man traveled frequently and met with the most prestigious people from all over the world.

Could Epstein have faked his own death, through his associates being paid a lot of cash, and could he be settling into a new life?

The answer is how you see it. Epstein’s wealth has never been determined. He lived the good life but was, in fact, a predator who liked very young girls. Could he have planned an elaborate plot to secure his well being if he were indicted? Well, yes, he could have.

Maybe one day the truth will come out but in my humble opinion, the facts are hush, hush and something isn’t right.

If I die from a suicide, please have an investigation. Thank you.