Did the Obama Regime Pay for the Missiles Fired at US? 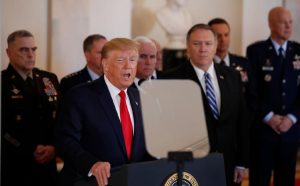 On Wednesday former President Barack Obama took some heat as President Trump blamed the last administration for money given by the Obama regime to Iran.

Trump has claimed that the money given to Iran by the Obama administration was used to pay for missiles that were aimed at U.S. troops in Iraq.

The nation listened and watched as Trump spoke the morning following the Iranian regime’s launching of more than a dozen missiles at Iraqi bases which house American troops.

The missiles were fired by Iran in a retaliatory attack for the U.S. strike last week that killed top Iranian General Qassem Soleimani.

While referring to settlement money the U.S. paid to Iran in 2016, Trump said from the White House, “The missiles fired last night at us and our allies were paid for with the funds made available by the last administration.”

The Joint Comprehensive Plan of Action (JCPoA) is the Obama-era Iran nuclear deal. The U.S. withdrew from it in 2018.

Supporters of the deal claimed it kept Iran from getting a nuclear weapon.

Trump on the other hand renewed his assertion that it bolstered Tehran.

Trump said, “Iran’s hostilities substantially increased after the foolish Iran nuclear deal was signed in 2013, and they were given $150 billion, not to mention $1.8 billion in cash. Instead of saying thank you to the United States, they chanted ‘Death to America.’”

He added that Iran went on a “terrorist spree” with that money “and created hell in Yemen, Syria, Lebanon, Afghanistan and Iraq.”

He went on to say that it was with that money that the missiles fired late Tuesday were funded.

Trump has never been a fan of the deal and zeroed in particularly on the money that was unfrozen or sent to Iran directly in the darkness of night.

It cannot be determined exactly how the missiles were paid for but some Republicans have connected the Iran settlement money to the attacks.

While on Fox News’ “Hannity” on Tuesday night, Texas Senator Ted Cruz said, “In a very real sense, the missiles that we saw fired at U.S. servicemen and women tonight were paid for by the billions that the Obama administration flooded the Ayatollah with.”

The money that was paid in cash, was transferred with a planeload of $400 million delivered to Tehran on Jan. 17 2016. On the same day Iran agreed to release four American prisoners.

The payment of $1.3 billion that remained was reported to have been paid within weeks of that first payment.

Then there is $150 billion which is an estimated value of Iranian assets that had been frozen abroad in financial institutions as part of international sanctions. That money was unfrozen as part of the deal.

That money could generate about $55 billion in liquid assets.

After leaving the Obama-Iran deal, the Trump administration has put back sanctions on Tehran. Violations by the Iranian regime by stockpiling uranium has brought back the restrictions.

Trump has called for other countries to break away from the deal and secure a new one.

Trump said, “The time has come for the United Kingdom, Germany, France, Russia and China to recognize this reality. They must now break away from the remnants of the Iran deal or JCPOA. And we must all work together toward making a deal with Iran that makes the world a safer and more peaceful place.”

I write for http://DefiantAmerica.com, http://aleadernotapolitician.com/ https://magamedia.org/ and http://FreeAmericaNetwork.com & Graphic Artist & Video producer. I adore journalism. Politics seems to be my preferred genre although I do not hesitate to write anything that strikes me as interesting. Researching and finding 'Breaking News' makes my blood rush. I've written seventeen books. and over that including books in conglomeration with others. Doing graphic art design has always been fun for me. Sometimes I incorporate this talent into my articles or when a special 'feature picture' is required. You can find me tweeting on: https://twitter.com/DavedaGruber You can always find my articles on the sites I write for.
View all posts by Daveda →
Tagged Iran, President Trump, Qassem Soleimani. Bookmark the permalink.