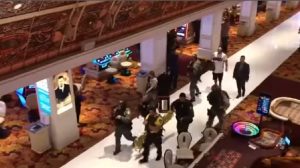 Since this is the anniversary of the mass shooting in Las Vegas in 2017, let’s take a look at what could have been underlying motives or involvement to some degree, by people who are not the players who are known to us.

A lot of rumors started to fly when Saudi Prince Alwaleed bin Talal was arrested in King Salman’s anti-corruption crackdown.

Saudi Prince Alwaleed bin Talal who, together with Bill Gates, owns the Four Seasons Hotel that is located within the 5 top floors of the Mandalay Bay Hotel in Las Vegas.

That is the same Mandalay Bay Hotel in Las Vegas that was the site of the deadliest mass shooting in our nation’s history.

On the night of October 1, 2017, a lone gunman, Stephen Paddock, opened fire on a crowd of concertgoers at the Route 91 Harvest music festival on the Las Vegas Strip in Nevada. He killed 58 people and wounded 422, with the ensuing panic bringing the injury total to 851.

Paddock shot himself and died from his wounds in the hotel room where he had fired shots from the windows.

Here is a video of the moment police entered the Las Vegas gunman’s room:

The Four Seasons Hotel-within-a-hotel boasts its own private elevators and separate entrance.

Prince Alaweed’s arrest was the result of King Salman’s decree to create an anti-corruption committee chaired by his son, Crown Prince Mohammed bin Salman. Getting confused yet?

The allegations against Prince Alwaleed include money laundering, bribery and extorting officials. Prince Miteb is accused of embezzlement, hiring ghost employees and awarding contracts to his own companies including a $10 billion deal for walkie talkies and bulletproof military gear worth billions of Saudi royals.

The Prince’s investment company, Kingdom  Holding Company, is a major shareholder in Time Warner Cable that owns CNN. They also own a major chunk of  AOL that owns the Liberal multi-author blogging platform posing as a news source-Huffpost.

Jim Murren, CEO of MGM dumped millions of dollars worth of his stocks in the weeks leading up to the massacre. The same MGM that owns the Mandalay Bay Hotel.

CEO Jim Murren circulated an internal memo that stated that he would match donations to CAIR which is a terrorist organization and the ADL a very anti-Trump, pro-Islamic organization.

Back in ’07 Dubai World became partners with MGM. So Las Vegas has ties to Saudi money, that much we know.

Dubai World, the investment holding firm of the Dubai government, will acquire a 9.5 percent stake in MGM Mirage and 50 percent of the casino operator’s CityCenter development project for $5 billion. Follow the money trail?

Dubai World referred to the deal as a “long term strategic partnership.” The money trail get more important.

Also caught up in King Salman’s sweep was the Commander of the Saudi Navy as well as the Minister of the National Guards. No mention yet of the Royal Saudi Air Force. This is a real cleaning up of any mess.

It is not known  if investigation into the criminal activities of Saudi Prince Alwaleed bin Talal will expose any involvement in the Las Vegas shooting but there is a video that shows a man, said to be Alwaleed bin Talal and another that could be Crown Prince Mohammed bin Salman, dressed as a regular gamblers. This is said to be commonplace and is done regularly. It is alleged that Alwaleed bin Talal was gambling at the Tropicana Casino. Both princes like to blend in and gamble.

This is a video taken from inside the Tropicana that shows a swat team entering and possibly escorting one or two men out of the building:

Who was alerted to the shooting? Was the shooting a diversion to the possibility that Alwaleed bin Talal or Crown Prince Mohammed bin Salman could be assassinated? The facts are all too muffled to know. At this point there are too many unanswered questions for anything but speculation.

It’s too early to tell if King Salman, who President Trump has promoted a friendly relationship with, will share such potentially embarrassing knowledge should it be discovered.

Did President Trump’s speech before the Arab Islamic American Summit last May, urging Saudis and other middle eastern nations to drive out terrorists, inspire King Salman to clean the Royal House?

Salman has commented on Islam during a rare public foray at a high-level business and finance conference in Riyadh, underlining the fact that widespread economic changes are going hand-in-hand with sweeping social ones.

He said on Oct. 24, 2017 before some 3,500 delegates from around the world, “We are returning to what we were before, a country of moderate Islam that is open to all religions and to the world. We will not spend the next 30 years of our lives dealing with destructive ideas. We will destroy them today.”

In the mean time, does what happens in Las Vegas actually stay in Las Vegas? Not when there are videos.

I write for http://DefiantAmerica.com, http://aleadernotapolitician.com/ https://magamedia.org/ and http://FreeAmericaNetwork.com & Graphic Artist & Video producer. I adore journalism. Politics seems to be my preferred genre although I do not hesitate to write anything that strikes me as interesting. Researching and finding 'Breaking News' makes my blood rush. I've written seventeen books. and over that including books in conglomeration with others. Doing graphic art design has always been fun for me. Sometimes I incorporate this talent into my articles or when a special 'feature picture' is required. You can find me tweeting on: https://twitter.com/DavedaGruber You can always find my articles on the sites I write for.
View all posts by Daveda →
Tagged Crown Prince Mohammed bin Salman, King Salman, Las Vegas, Prince Alwaleed, Prince Alwaleed bin Talal, Stephen Paddock. Bookmark the permalink.