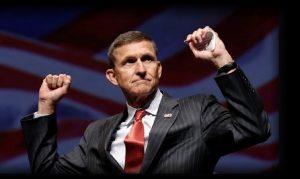 On Thursday the Justice Department made a move to drop the case former National Security Adviser Michael Flynn. This came after internal memos were released that raised profound questions about the nature of the investigation of Flynn.

In a court filing, the department proclaimed it is dropping the case that led to Flynn’s 2017 guilty plea of lying to the FBI, “after a considered review of all the facts and circumstances of this case, including newly discovered and disclosed information.”

It was concluded by the DOJ that Flynn’s interview by the FBI was “untethered to, and unjustified by, the FBI’s counterintelligence investigation into Mr. Flynn.” The DOJ also put on record that and that the interview was “conducted without any legitimate investigative basis.”

The final determination to dismiss the case would need to come from the federal judge who is overseeing the case.

Flynn, who is a retired Army lieutenant general, has, with the help of his new attorney Sidney Powell, been trying to withdraw the plea. The case appeared to be at a standstill and even President Trump has been asked about whether he would pardon Flynn.

Brandon Van Grack, who was the top prosecutor on the case,  abruptly withdrew, without explanation, in a brief filing with the court.

Flynn earlier this year moved to withdraw his guilty plea for making false statements to the FBI regarding his communications with Kislyak. His legal team, at the time, said that the move was “because of the government’s bad faith, vindictiveness and breach of the plea agreement.”

Allies of Flynn argued that he was basically set up in a perjury trap. In that interview, Flynn did not admit wrongdoing. He was accused of lying about his contacts with the then Russian ambassador He pleaded guilty.

At that point, Flynn was fired from his prominent post as national security adviser in February 2017. His resignation came as he was accused of misleading Vice President Pence and other senior White House officials about his communications with Sergey Kislyak.

With that in mind, the latest DOJ filing took note that Flynn’s false statement plea pertains to a crime that requires a statement “to be not simply false, but ‘materially’ false with respect to a matter under investigation.”

The filing stated that the government “is not persuaded that the January 24, 2017 interview was conducted with a legitimate investigative basis and therefore does not believe Mr. Flynn’s statements were material even if untrue.”

Jeff Jensen, who is the U.S. attorney reviewing the Flynn case, put in a recommendation, and last week put that recommendation in writing last week, to Attorney General William Barr to drop the case.

Jensen wrote, “Through the course of my review of General Flynn’s case, I concluded the proper and just course was to dismiss the case. I briefed Attorney General Barr on my findings, advised him on these conclusions, and he agreed.”

On Wednesday, the DOJ had released a mostly unredacted version of former acting Attorney General Rod Rosenstein’s August 2017 “scope memo,” which outlined the authority of former Special Counsel Robert Mueller had for his investigation.

Well, that document brought to light, for the first time, that Mueller’s authority went drastically beyond what had been known previously.

Who would have guessed? Okay, maybe me and a couple of others?

It was well known that Rosenstein’s memo had authorized Mueller to probe “any links and/or coordination between the Russian government and individuals associated with the campaign of  President Donald Trump and any matters that arose or may arise directly from the investigation,” and “any other matters within the scope of [obstruction of justice laws].”

The new document verified that Rosenstein authorized a deep-rooted criminal probe into the Trump campaign. That would have extended well beyond Russian interference efforts but was it necessary?

It was in the memo that it was revealed that Mueller was, among other things, looking into whether Flynn “committed a crime or crimes by engaging in conversations with Russian government officials during the period of the Trump transition.”

At least the DOJ saw that. Maybe this could put an end to the allegations against Flynn.

A note from FBI officials said, “What is our goal? Truth/Admission or to get him to lie, so we can prosecute him or get him fired?”

Here’s where the Logan Act, which has not been used in a very long time comes into play.

The FBI notes say, “If we get him to admit to breaking the Logan Act, give facts to DOJ + have them decide.”

Another note by the FBI read that the memo appears to weigh the pros and cons of pursuing those different paths, while cautioning, “If we’re seen as playing games, WH [White House] will be furious.”

The White House will be furious? Really? The American people would be furious, or least Conservative Americans, would be upset, to say the least.

Flynn and his family were put through Hell! Does that mattert?

Flynn was set up. Those who did this to an American hero are to blame. Real justice should be served. That is my final statement.

I write for http://DefiantAmerica.com, http://aleadernotapolitician.com/ https://magamedia.org/ and http://FreeAmericaNetwork.com & Graphic Artist & Video producer. I adore journalism. Politics seems to be my preferred genre although I do not hesitate to write anything that strikes me as interesting. Researching and finding 'Breaking News' makes my blood rush. I've written seventeen books. and over that including books in conglomeration with others. Doing graphic art design has always been fun for me. Sometimes I incorporate this talent into my articles or when a special 'feature picture' is required. You can find me tweeting on: https://twitter.com/DavedaGruber You can always find my articles on the sites I write for.
View all posts by Daveda →
Tagged General Michael Flynn. Bookmark the permalink.