Here are the Topics for First Trump-Biden Debate 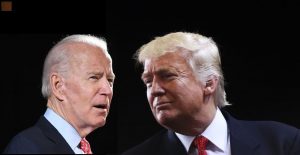 The topics that will be debated during the first debate between President Trump and former Vice President Democratic presidential nominee Joe Biden have been released.

Chris Wallace, who is the anchor of Fox News Sunday, will moderate the debate. On Tuesday the nonpartisan Commission on Presidential Debates announced the issues.

One of the issues will be the Supreme Court nomination that came to the table after the death of Supreme Court Justice Ruth Bader Ginsburg and now, her replacement.

Protests and violence that have happened and are still taking place in some cities across the country will be a topic too.

Wallace also included a crucial issue, which came into light over expanded voting by mail amid the pandemic, the Biden and Trump records and the integrity of the election.

The nonpartisan commission has organized and conducted the presidential and vice presidential general election debates for more than three decades. They have warned that the topics listed are subject to possible changes because of news developments.

The commission has make clear that topics were announced in advance in order to encourage deep discussion of the leading issues facing the country.

So far, in a nutshell, these are the topics:

The Trump and Biden Records

Race and Violence in our Cities

The Integrity of the Election

The format for the first showdown calls for six 15-minute long segments. Each segment will be dedicated to a particular topic.

There will be two more debates between Trump and Biden, one on October 15th in Nashville, Tennessee and another in October on the 22nd in Miami, Florida.

The other debate will be between Senator Kamala Harris of California and Vice President Mike Pence will take place on October 7th in Salt Lake City, Utah.

The four debates will start at 9 pm ET and will run for 90 minutes without any commercials to interrupt the events.

The fact that the topics were given in advance has been made clear. It does make me wonder how much knowledge of the exact questions are known, specifically to the Biden team.

It has not been mentioned if notes will be permitted.

Get the popcorn ready, this is going to be very interesting and I believe fun too!

I write for http://DefiantAmerica.com, http://aleadernotapolitician.com/ https://magamedia.org/ and http://FreeAmericaNetwork.com & Graphic Artist & Video producer. I adore journalism. Politics seems to be my preferred genre although I do not hesitate to write anything that strikes me as interesting. Researching and finding 'Breaking News' makes my blood rush. I've written seventeen books. and over that including books in conglomeration with others. Doing graphic art design has always been fun for me. Sometimes I incorporate this talent into my articles or when a special 'feature picture' is required. You can find me tweeting on: https://twitter.com/DavedaGruber You can always find my articles on the sites I write for.
View all posts by Daveda →
Tagged Joe Biden, President Trump. Bookmark the permalink.