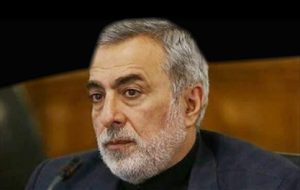 According to Iranian state media another high-ranking official, Hossein Sheikholeslam, has died from the coronavirus.

Sheikholeslam, who was sixty-eight years old, was the Iranian ambassador to Syria. He studied at the University of California at Berkely and later became a leader of the radical Iranian students who stormed the U.S. Embassy in Tehran on November 4, 1979 and held hostages until January 20, 1981.

Sixty-six American citizens at the U.S. embassy in Tehrān were held hostage and fifty-two of them were held for 444-days, which is more than a year.

It was reported that Sheikholeslam died late Thursday. He had tested positive two days prior to dying but the Islamic Republic News Agency had announced that he was recovering.

Sheikholeslam is the sixth Iranian politician or government official to be killed by the virus in Iran. Before his death he was serving as an aide to Foreign Affairs Minister Mohammad Javad Zarif.

Iran has rejected help with the coronavirus outbreak that was offered by the Trump administration.

The Iranian death toll from coronavirus reached 124 with 4,747 cases across the country being reported. Iran may enforce a travel ban between Iranian cities.

Iranian officials who have died fro the corona virus are:

A member of Tehran parliament, Fatemeh Rahbar, remains in a coma after being infected.

ISNA is reporting many other officials have been infected and are under quarantine.

Vice President Masoumeh Ebtekar who is known in the West as “Screaming Mary” for her role as a spokeswoman during the hostage crisis.

Grand Ayatollah Musa Shobairi Zanjani, who is considered one of the country’s highest religious authorities.

Revolutionary Guard General Hossein Salami falsely accused the U.S. created the virus in the midst of growing tensions between the two nations.

Salami told a crowd in the Iranian city of Kerman, “We will win in the fight against the virus, which may be the product of the American biological invasion, which it first spread to China and then to Iran and the rest of the world. The U.S. must know that if it did it, (the virus) will return to it.”

Islamic leaders are facing enragement and suspicion from the people of Iran because of the shooting down a Ukrainian passenger jet in January. One hundred and seventy-six people died in the downing of the jet and most of them were Iranian citizens. Maybe this was Salami’s way of diverting the blame of the coronavirus to take concerns off the Iranian government, and in fact, change the dialoge.

Health minister Saee Namaki said, “This virus is highly contagious. It is a serious matter, do not joke about it.”

I agree that the coronavirus is not a joke but pointing fingers at a country which is not an ally, is not the answer.

I’d add that losing government officials in Iran is not a concern of mine but maybe KARMA may have played a part in it.

I write for http://DefiantAmerica.com, http://aleadernotapolitician.com/ https://magamedia.org/ and http://FreeAmericaNetwork.com & Graphic Artist & Video producer. I adore journalism. Politics seems to be my preferred genre although I do not hesitate to write anything that strikes me as interesting. Researching and finding 'Breaking News' makes my blood rush. I've written seventeen books. and over that including books in conglomeration with others. Doing graphic art design has always been fun for me. Sometimes I incorporate this talent into my articles or when a special 'feature picture' is required. You can find me tweeting on: https://twitter.com/DavedaGruber You can always find my articles on the sites I write for.
View all posts by Daveda →
Tagged Hossein Sheikholeslam, Iran, Mohammad Javad Zarif, Qassem Soleimani. Bookmark the permalink.