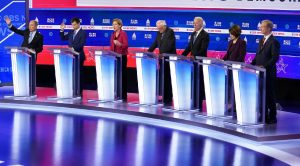 On Wednesday, Debbie Dingell, who is the Democratic Representative of Michigan, was not happy with the performance of her fellow Democrats, who are running for the front position in the race for the presidential candidate.

Dingell, who is the wife of the late Representative John Dingell, called the White House hopefuls on stage at the debate in South Carolina a “disgrace.”

Speaking of the spectacle on Tuesday night Dingell said, “It was a disgrace. It was a circular firing squad. They’re forgetting about what we need to be focused on.”

She went on to say, “They’re contributing to the fear and hatred in this country. I’m sure Russia and China were delighted at their performance.”

Some critics blamed CBS News moderators for not keeping the seven candidates in order but it actually was the candidates who were out of control but Dingell blamed the candidates.

It really was chaotic on the stage. Senator Bernie Sanders I-Vt., who is a self proclaimed Socialist was defiantly under attack. The reason being that Sanders has emerged as the frontrunner in the primary race.

The two former mayors, Mike Bloomberg and Pete Buttigieg, disputed that with Sanders as the nominee, Democrats who were on the ballot could lose to Republicans.

Remember that people do vote “Down the Line” and Dingell could have a point there.

Still, Dingell said that she was “tired of people stirring that pot.”

Dingell retorted “They are all strong candidates but if they keep tearing each other apart, they are helping each other make sure none of them are strong at the top of the ticket.”

Dingell has deep ties in the Democratic Party in swing-state Michigan but hasn’t endorsed a candidate yet.

I’d like to tell Dingell that it’s not worth it to endorse anyone of them but I’ll keep that to myself and with my readers.

I write for http://DefiantAmerica.com, http://aleadernotapolitician.com/ https://magamedia.org/ and http://FreeAmericaNetwork.com & Graphic Artist & Video producer. I adore journalism. Politics seems to be my preferred genre although I do not hesitate to write anything that strikes me as interesting. Researching and finding 'Breaking News' makes my blood rush. I've written seventeen books. and over that including books in conglomeration with others. Doing graphic art design has always been fun for me. Sometimes I incorporate this talent into my articles or when a special 'feature picture' is required. You can find me tweeting on: https://twitter.com/DavedaGruber You can always find my articles on the sites I write for.
View all posts by Daveda →
Tagged Debbie Dingell. Bookmark the permalink.