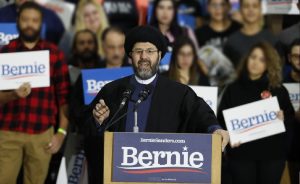 One of the two front runners for the top Democrat position, Bernie Sanders I-Vt., featured an imam at a weekend rally in Dearborn, Michigan.

Imam Sayed Hassan al-Qazwini, who had made claims in the past that ISIS is “connected to Israel” as part of a conspiracy to murder people to make the religion of Islam look bad. The Imam praised Sanders for uniting Americans.

Al-Qazwini said, “ISIS somehow is connected to Israel. And ISIS is playing the role of the arm of the Zionists in the Muslim world to kill more Muslims and non-Muslims so it can define the name of Islam, so people can blame Islam for its atrocities, so people will be alienated from this religion.”

This is an archived video posted on Twitter that shows the imam speaking on the subject:

Later, in the comments to the tweet the imam claimed that Muslims in Europe and the U.S. were put in danger by ISIS’ actions and that Zionists were to blame because they benefited from these atrocities.

Sanders’ campaign has some out of the box supporters and this past weekend added Phillip Agnew, who is an artist and organizer, to its official staff.

Agnew had tweeted the day bin Laden was killed by American Navy Seals and in the tweet said.  “I don’t believe sh*t America, and by default Obama, says. Sorry. We prolly BEEN killed Osama. All choreography. Got no proof; gut feeling.”

Also, Agnew had made derogatory statement about Michelle Obama’s looks.

Agnew apologized for all the remarks in a tweet saying “Thank you for holding me accountable.”

still, words have power to heal & to harm and i acknowledge and apologize for when my words harm.

i’ve spent years speaking life and love into my community but i was wrong and i have to be accountable.

please take a minute to read my statement: pic.twitter.com/RCuFUyAr7W

It appears that Sanders attracts some rather vocal campaign staffers and supporters.

Sanders is Jewish and declined to go to the American Israel Public Affairs Committee conference saying he would boycott the massive conference and accused its leaders of welcoming bigots.

May I remind everyone that Sanders is a self proclaimed socialist and communism is not far off from those ideals? Sanders’ supporters don’t seem to appreciate freedom or the American way of life that we have fought so hard to attain.

As well as writing, I am a graphic artist. I happened to make a meme that represents my thinking on socialism. 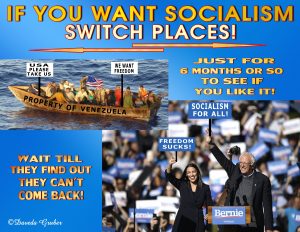 I write for http://DefiantAmerica.com, http://aleadernotapolitician.com/ https://magamedia.org/ and http://FreeAmericaNetwork.com & Graphic Artist & Video producer. I adore journalism. Politics seems to be my preferred genre although I do not hesitate to write anything that strikes me as interesting. Researching and finding 'Breaking News' makes my blood rush. I've written seventeen books. and over that including books in conglomeration with others. Doing graphic art design has always been fun for me. Sometimes I incorporate this talent into my articles or when a special 'feature picture' is required. You can find me tweeting on: https://twitter.com/DavedaGruber You can always find my articles on the sites I write for.
View all posts by Daveda →
Tagged Bernie Sanders, Imam Sayed Hassan al-Qazwini, Phillip Agnew. Bookmark the permalink.