Iran Blamed for US Embassy Attack in Iraq 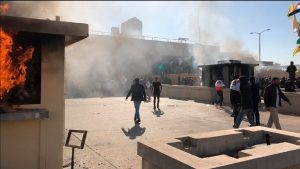 On Tuesday, Iran has been accused of coordinating the attack at the U.S. embassy compound in Baghdad, Iraq and the accusation came directly from President Trump.

Trump has promised to hold the regime “fully responsible.”

In retaliation to U.S. airstrikes, Iraqi Shiite militia supporters allegedly smashed down a gate and gained entrance to the compound.

Trump made it clear that the strikes were in response to the killing of an American contractor.

On Tuesday morning Trump tweeted this:

Iran killed an American contractor, wounding many. We strongly responded, and always will. Now Iran is orchestrating an attack on the U.S. Embassy in Iraq. They will be held fully responsible. In addition, we expect Iraq to use its forces to protect the Embassy, and so notified!

Although this break into the compound was allegedly made by dozens of Iraqis, there were hundreds of them who tried to break through in an earlier attempt.

Twenty-five fighters from Iran backed Shiite militia Kataeb Hezbollah were killed in U.S. led airstrikes earlier this week and funerals were being held and this may have led to unrest from other militia.

The airstrikes by U.S. military were prompted by a rocket attack on an Iraqi military base that killed an American contractor and his death had been blamed on the militia.

A chaotic scene with flames coming from the inside of the embassy and at least three U.S. soldiers on the roof of the embassy on Tuesday was reported. Chants were described as a crowd on the ground shouting “Down, down USA!”

Fortunately, there were no reports of casualties but the attack was seen to be one of the worst on the embassy.

With Iran and the U.S. both allies of the Iraqi government, the pressure is on to maintain a balance.

The Iraqi government did not react well to the U.S. airstrikes and didn’t prevent the protesters from reaching the U.S. Baghdad embassy. Iraqi security forces had made an effort to stop the protesters who marched to the heavily fortified Green Zone.

It was reported that a man on a loudspeaker who was with Iraqi security, urged the mob not to enter the compound, saying, “The message was delivered.”

There is now a major deterioration in Iraqi-U.S. relations but Iraqi security forces

Ambassador Matthew H. Tueller was not evacuated from the embassy but reports revealed that he has been out of the country on a previously planned vacation.
Senator Marco Rubio, R-Fla., joined Trump in blaming Iran for the attack.

#Iran is directly responsible for orchestrating the storming of the US Embassy in #Iraq & must be held accountable for it & the safety of every American serving there.

I write for http://DefiantAmerica.com, http://aleadernotapolitician.com/ https://magamedia.org/ and http://FreeAmericaNetwork.com & Graphic Artist & Video producer. I adore journalism. Politics seems to be my preferred genre although I do not hesitate to write anything that strikes me as interesting. Researching and finding 'Breaking News' makes my blood rush. I've written seventeen books. and over that including books in conglomeration with others. Doing graphic art design has always been fun for me. Sometimes I incorporate this talent into my articles or when a special 'feature picture' is required. You can find me tweeting on: https://twitter.com/DavedaGruber You can always find my articles on the sites I write for.
View all posts by Daveda →
Tagged Iran, Iraq US Embassy. Bookmark the permalink.