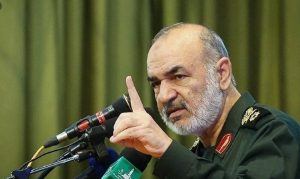 On Thursday Iran’s Revolutionary Guard Corps leader, Major General Hossein Salami, claimed that his troops will “destroy any American terrorist force” that threatens his country’s ships in the Persian Gulf.

The statement was made on Iranian state TV by Salami after President Trump had tweeted out a message that warned Iran that he had instructed the United States Navy to shoot down and destroy any and all Iranian gunboats if they harass our ships at sea.

Trump had been responding to incidents in International waters in the Persian Gulf  where Iranian ships repeatedly crossed in front and behind U.S. ships at exceedingly high speeds and very close range.

Iranian Islamic Revolutionary Guard Navy vessels had made aggressive maneuvers near American ships, the Puller and the Maui, in International waters in the Persian Gulf. Iranian boats came within 10 yards of the Maui.

The Strait of Hormuz is the gateway to the Persian Gulf which is an important trade route and the United States has made efforts to protect it.

Reuters reported that on Thursday Salami said, “I have ordered our naval forces to destroy any American terrorist force in the Persian Gulf that threatens security of Iran’s military or non-military ships. Security of the Persian Gulf is part of Iran’s strategic priorities.”

The US military is hit by over 5000 #covid19 infections. @realdonaldtrump should attend to their needs, not engage in threats cheered on by Saddam’s terrorists.

Also, US forces have no business 7,000 miles away from home, provoking our sailors off our OWN Persian Gulf shores. pic.twitter.com/7CjzabkyVK

Zarif ‘s tweet was referencing former Iraqi President Saddam Hussein who had gone to war with Iran before being overthrown by the United States. The tweet also shows a map that shows that most of Iran’s shoreline is the Persian Gulf.

War is never to anyone’s benefit. Lives are lost during hostile endeavors but the United States has  more military strength than Iran. It appears that Iran is flexing her power at Trump and the United States after Iran was the instigator with the U.S. ships in the Persian Gulf to begin with. Now that Trump has called Iran out for aggression, they want to make it like they are the victims.

I write for http://DefiantAmerica.com, http://aleadernotapolitician.com/ https://magamedia.org/ and http://FreeAmericaNetwork.com & Graphic Artist & Video producer. I adore journalism. Politics seems to be my preferred genre although I do not hesitate to write anything that strikes me as interesting. Researching and finding 'Breaking News' makes my blood rush. I've written seventeen books. and over that including books in conglomeration with others. Doing graphic art design has always been fun for me. Sometimes I incorporate this talent into my articles or when a special 'feature picture' is required. You can find me tweeting on: https://twitter.com/DavedaGruber You can always find my articles on the sites I write for.
View all posts by Daveda →
Tagged Hossein Salami, Iran, Javad Zarif, Persian Gulf. Bookmark the permalink.