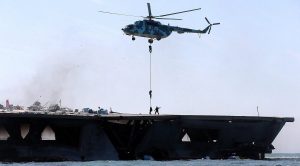 On Saturday a video was released by Iran’s Revolutionary Guards that shows commandos in black ski masks rappelling from a helicopter onto a British oil tanker that was seized in the Strait of Hormuz.

The vessel was seized with a crew of 23 crew aboard it but it is reported that none aboard the vessel are British nationals.

The video shows the ‘Stena Impero’ tanker being surrounded by smaller boats. The Revolutionary Guard Corps commandos in the video are wearing black ski masks, which disguises their identity.

The smaller boats or Guard boats are said to be surrounding the ‘Stena Impero’ tanker in the video as a helicopter hovered above and the commandos rappelled onto the tanker.

The video is of high quality and it appears to have been taken by two cameras, one from a small boat that appears to be a speed-boat. The video aired on Iranian state TV.

Britain’s Foreign Secretary Jeremy Hunt warned Iran that it’s on a “dangerous path.” He added that a response would be “considered but robust.”

Hunt also said that Iranians’ behavior is “illegal and destabilizing” and warned of “serious consequences” after the tanker was seized in the Strait of Hormuz on Friday.

In comments on Twitter he said that he spoke to Iran’s foreign minister and express extreme disappointment that the Iranian diplomat had assured him Iran wanted to de-escalate the situation but “they have behaved in the opposite way.”

Just spoke 2 Iranian FM Zarif &expressed extreme disappointment that having assured me last Sat Iran wanted 2 deescalate situation they have behaved in the opposite way.This has 2 be about actions not words if we are to find a way through.British shipping must & will be protected

Senior officials said that their seizure of the Stena Impero as well as the brief detainment of a second UK-flagged vessel were a “reciprocal” measure amid economic sanctions.

The British navy seized an Iranian tanker in Gibraltar two weeks ago. That came about amid suspicions of shipping oil to Syria in violation of sanctions imposed by the European Union. Maritime trackers show it was headed to a port in Saudi Arabia.

Abbas Ali Kadkhodaei, who is a spokesman of Iran’s Guardian Council, allegedly said that the seizure of the tanker was warranted on the basis reciprocity as the British navy seized an Iranian tanker in Gibraltar two weeks ago amid suspicions of shipping oil to Syria in violation of sanctions regime imposed by the European Union.

On Friday, President Trump said that Iran is “nothing but trouble” soon after the news of the seized tankers broke. Trump remained hopeful the standoff will work out “very nicely.”

The president added that the (Iranian) regime “is showing their colors” by seizing the tankers and that it’s in “big trouble right now” due to the crushing sanctions imposed by the U.S.

Here is a video of the Helicopter incident:

Security in the Strait of Hormuz has been deteriorating. There have allegedly been six attacks on oil tankers that the U.S. has blamed on Iran  and the Tehran government denies.

These episodes have shaken up the shipping industry. Some of the 2,000 companies operating ships in the region are now on high alert. Many have ordered their vessels to use the Strait of Hormuz only during the daylight hours and to travel at high speed.

There are only a small amount of companies that stopped transit altogether.

Personally, I’m not looking forward to seeing a war break out. I hope that tensions in the area will ease but then, that’s not up to me. We’ll have to wait and see what happens next.

I write for http://DefiantAmerica.com, http://aleadernotapolitician.com/ https://magamedia.org/ and http://FreeAmericaNetwork.com & Graphic Artist & Video producer. I adore journalism. Politics seems to be my preferred genre although I do not hesitate to write anything that strikes me as interesting. Researching and finding 'Breaking News' makes my blood rush. I've written seventeen books. and over that including books in conglomeration with others. Doing graphic art design has always been fun for me. Sometimes I incorporate this talent into my articles or when a special 'feature picture' is required. You can find me tweeting on: https://twitter.com/DavedaGruber You can always find my articles on the sites I write for.
View all posts by Daveda →
Tagged Iran, Stena Impero. Bookmark the permalink.