Is Iran Looking for a War? 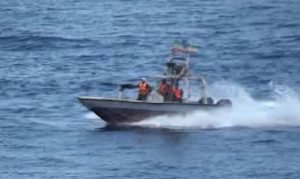 News came to me on Wednesday morning by way of a tweet and yes, President Trump tweeted an interesting bit of information that might be a game changer.

When the United States Navy is instructed to “shoot down and destroy” any Iranian gunboats harassing American ships, that’s news.

There has been activity in the Persian Gulf and Iranian gunboats have been getting close to American ships in the area.

I have instructed the United States Navy to shoot down and destroy any and all Iranian gunboats if they harass our ships at sea.

TIMELY FLASHBACK: Joe Biden and John Kerry apologized and even thanked Iran after they kidnapped 10 US soldiers.

The U.S. Navy’s 5th Fleet reported that the Iranian vessels “repeatedly crossed the bows and sterns” of the American ships “at extremely close range and high speed” They called the actions “dangerous and provocative.”

An Iranian ship came within 10 yards of a U.S. vessel’s bow.

The Navy has reported that the USS Paul Hamilton, USS Firebolt, USS Sirocco and USCGC Wrangell, as well as the Puller and Maui, which were the two ships that had the closest encounters, were involved in the exercises.

This harassment by Iranian gunboats on U.S. and allied ships has gone on for quite some time now.

The Strait of Hormuz is a key passage where a third of the world’s oil supply travels.

Could these actions lead to a war? That would depend on if Iranian leaders want to fight in a war against the United States and her allies.

It appears that Trump isn’t going to stand for the rhetoric from Iran. Whether or not Iran will back down depends on if they are willing to show humility by way of backing down.

I write for http://DefiantAmerica.com, http://aleadernotapolitician.com/ https://magamedia.org/ and http://FreeAmericaNetwork.com & Graphic Artist & Video producer. I adore journalism. Politics seems to be my preferred genre although I do not hesitate to write anything that strikes me as interesting. Researching and finding 'Breaking News' makes my blood rush. I've written seventeen books. and over that including books in conglomeration with others. Doing graphic art design has always been fun for me. Sometimes I incorporate this talent into my articles or when a special 'feature picture' is required. You can find me tweeting on: https://twitter.com/DavedaGruber You can always find my articles on the sites I write for.
View all posts by Daveda →
Tagged Iran. Bookmark the permalink.