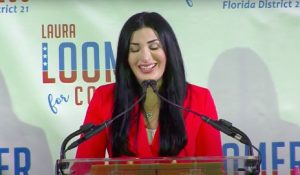 She won a six-way primary for the right to face Rep. Lois Frankel (D) in the general election. She also raised more than $1 million with support from Alex Jones, pardoned Trump ally Roger Stone and Florida Representative Matt Gaetz.

Great going Laura. You have a great chance against a Pelosi puppet! https://t.co/pKZp35dUYr

Frankel, 72, has been seated in the Palm Beach County district for decades. It has been a Democratic stronghold. Republicans have only run a candidate in one of the four previous elections since its current boundaries were drawn in 2012. Frankel managed to beat that challenger in 2016 by just 27 points.

Loomer ran for the district in a six candidate race. She received 43%  the Republican field. She managed to get 14,500 votes. The combined Republican candidates totaled 34,000 votes.

Frankel ran against a political newcomer and received 75,000 votes, or 86% in the Democratic primary. In total 87,000 votes Democratic votes were cast.

This was only the primary. I suspect more people will be voting in November.

Decision Desk called the FL-21 for Laura Loomer at 8:02pm on August 18th, just over an hour after polls had closed:

It’s time to get a career Politian like Frankel out of office and let the conservative Loomer get things done.

Loomer is a fighter for conservative rights and will be a big asset for Florida’s 21st district, for the state and for Americans.

Roger Stone has stood for Loomer and he introduced her when she gave her acceptance speech. You can see it here:

I write for http://DefiantAmerica.com, http://aleadernotapolitician.com/ https://magamedia.org/ and http://FreeAmericaNetwork.com & Graphic Artist & Video producer. I adore journalism. Politics seems to be my preferred genre although I do not hesitate to write anything that strikes me as interesting. Researching and finding 'Breaking News' makes my blood rush. I've written seventeen books. and over that including books in conglomeration with others. Doing graphic art design has always been fun for me. Sometimes I incorporate this talent into my articles or when a special 'feature picture' is required. You can find me tweeting on: https://twitter.com/DavedaGruber You can always find my articles on the sites I write for.
View all posts by Daveda →
Tagged Laura Loomer, Roger Stone. Bookmark the permalink.