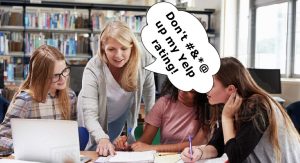 I looked at her quizzically for a second and said,”Are you sure? I went to Sierra many years ago and it wasn’t free for me.”

She said, “I thought it was crazy too but I checked it out and all first year students are allowed to attend classes free of charge.”

I thought about it for a second. I’ve never received anything for free that had any value but I am also aware that college in California used to be free, as the kids say, WAY back in the day.

“She’s having a hard time getting in because everything is full. She did get into an English class.”

In my head I thought of course she did. Very few here speak English anymore, at least not anything most of us recognize.

My friend continued. “Her teacher stood up in front of the class, introduced herself and said, ‘I have a five star Yelp review as a teacher of this class, so if you give me a rating, don’t fuck it up.”

This is the perfect explanation of why free is worthless.

Today’s liberal education is packed with profanity because the “educators” lack any knowledge in life let alone the subjects with which they are teaching.

When the first thing an English teacher says to her students is “Don’t fuck up my Yelp rating,” Houston we have a problem.

Sadly this type of verbiage is used more and more everyday.

Comics, Presidential candidates, and politicians in general have continued to “dumb down” each generation until we find them dancing around with fake vaginas, cheering drunk slurring singers, or sitting on the ground braying like a farm animal.

What is the RINO response?

Ted Cruz gave Alyssa I’m such a bastion of knowledge and self-control I had two abortions in a twelve month window Milano, a nationwide platform.

He seems to be getting pretty good at this as he also found time to agree with AO My life is such a Catastrophe I want to tell everyone else how to live but I cannot figure out how to pay off my student loans.

Where did we go wrong?

The error of our ways happened decades ago.

Too many members of the Me Generation decided that they were unique, important, special.

Apparently no one explained to the Free Love crowd that there are billions of people on the planet and more importantly that no one is “special”.

Special things can occur when the Individual embraces humility.

“There is no limit to the amount of good you can do if you don’t care who gets the credit.”

Today’s society is in full bloom of ME, ME, ME.

“I’m good enough, I’m smart enough, and gosh darn it, people like me.”

This was the tag line for a Saturday Night Live Al Franken skit. The same Al Franken who resigned from the Senate after being #MeTooed because he thought it funny to pretend to grab the breasts of a sleeping woman.

At least he didn’t write a column supporting gang rape, fantasize about running over children while driving, or pretend to be a Cherokee, then again Stuart Smalley does support these degenerates.

Still the tag line is a perfect explanation of where we are.

Selfies and self-affirmations probably make up most of social media.

It’s a flashing red light that the current population is scared, lost, and believes the only way out is to continue down the path of narcissism.

Break out the Adderall, edibles, and Rose for all.

Most under the age of forty knows what I just said, and those in the Boomer generation who don’t, have lost too many brain cells to care.

The mess we are in cannot only be addressed, but can be corrected, quite quickly.

By combining humility and ferocity a unique dawn is available to the American Individual.

It is time for a physical Proclamation.

It is time for the American to engage, with a ferocious spirit, the great task ahead, of removing the plague within our midst.