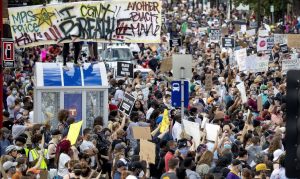 There has been a lot of mass protests after the death of George Flyod and people were all rather close; some wore masks but some of the protestors did not.

We’ve heard from health officials across the country and they have predicted many new cases would arise. They have also injected fear into people over this.

Testing for COVID-19 has risen because of the protests, rioting and looting. More than 1,300 people who protested Minnesota’s Twin Cities and the results may surprise some people.

Very few new cases are showing. More than 3,300 protesters have gone to be tested and 40 percent, or about 1,300 have received their test results.

Only about 1.4 percent tested positive for the virus.

That’s lower than the current seven-day average rate of positive tests, which also stands at 3.7 percent.

Even though the numbers are looking good, state Department of Health director of infectious disease, Kris Ehresmann, stated that there were not enough results to draw firm conclusions about the impact of the mass gatherings in Minnesota.

Ehresmann said, “Our testing is a bit pre-emptive, if you will,” It is a different situation.”

I will presume that Ehresmann is being pessimistic and believes the numbers could somehow be larger out of concern for the health of people living in the “North Star State.”

Personally, I’m getting fed up with my own state, which is Pennsylvania, and the fear mongering that is going on here and all over the country.

There are states that shutdown everything and people were on lockdown for fear of contracting the coronavirus.

That may have stayed in place if not for all the people gathering in masses while protesting, rioting and looting.

Sometimes good comes out of a bad situation. This may have happened in this circumstance.

Unfortunately, another man has died at the hands of a police officer in Atlanta, Georgia. Rayshard Brooks, 27, was fatally shot by police at a Wendy’s drive-thru after officials said he resisted arrest and stole an officer’s Taser.

I don’t even want to think about what will happen over this man’s death.

I write for http://DefiantAmerica.com, http://aleadernotapolitician.com/ https://magamedia.org/ and http://FreeAmericaNetwork.com & Graphic Artist & Video producer. I adore journalism. Politics seems to be my preferred genre although I do not hesitate to write anything that strikes me as interesting. Researching and finding 'Breaking News' makes my blood rush. I've written seventeen books. and over that including books in conglomeration with others. Doing graphic art design has always been fun for me. Sometimes I incorporate this talent into my articles or when a special 'feature picture' is required. You can find me tweeting on: https://twitter.com/DavedaGruber You can always find my articles on the sites I write for.
View all posts by Daveda →
Tagged George Flyod, Kris Ehresmann. Bookmark the permalink.