On You Mr. President 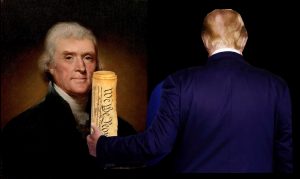 Four years ago the American People elected you, an outsider, primarily because of our porous border and the hatred of one Hillary Clinton.

We the People knew our systems had been corrupted, and hoped by bringing you in, Justice, would be restored.

Your stewardship and deregulation of the economy has been magnificent sans interest rates.

Your work outside of these United States has strengthened relationships between nations and saved many lives.

The mantra America First has been beautifully spread and there are tens of millions of supporters who showed their love by overwhelmingly voting to re-elect you with record Black, Hispanic, Women, and LGBTQ support.

In fact you received so much of this “diverse” support it is numerically improbable for you to factually lose.

Yet your unwillingness to listen to Americans who repeatedly told you your hires of Attorneys General, the Federal Bureau of Investigation and the Central Intelligence Agency were harmful to the country, and yourself personally, has all of us right back where we were four years ago.

The Clintons, Obamas, Bushes and too many in the FBI and CIA have broken so many laws, prior to this election, any expectation of them stopping is beyond naive.

You were beseeched, throughout your almost four years, specifically by this writer, to set an example and enforce the laws of our country.

You were warned that allowing the Hillary Clinton’s, Lois Lerner’s, James Comey’s et al. to walk free would only embolden their criminal behavior.

You declined while your supporters were first persecuted, then prosecuted and finally imprisoned.

You declined when members of the Obama Administration tried to frame you.

You declined when the Democratic Party took a fictionalized story and ran it through the corrupt media. . .for years.

You’ve publicly stated that an attempted coup has taken place yet no one has been arrested.

You’ve repeatedly stated that Treason has been committed yet no one has been indicted.

You are now telling us that our elections are fraudulent yet you do nothing but sue, talk, and tweet.

This is why we put you there.

We didn’t elect you to “fix” the economy.

The American Economy was the best in the world before and after the disaster of Clinton, Bush, Obama.

We didn’t elect you to “fix” our military.

The American Military was and is the best in spite of the aforementioned Liberal Trio.

We didn’t elect you to “fix” the Middle East.

They’ve been fighting for centuries and sadly will continue long after you have come and gone.

We elected The Donald because you were going to ENFORCE OUR LAWS.

Hillary would be prosecuted.

The Swamp would be drained.

None of this happened.

Because of this the Democratic and RINO criminals realized all they had to do was have Facebook and Twitter target you, and Americans that support the Rule of Law, and suppress our voices and dilute our votes with shadow bans and fake ballots.

They even took a “four hour break” to game plan when they realized your support was much greater than they expected.

We all knew this was coming, as we stated and waited for years, for you to do what we elected you to do.

As we sit here now, the Anti-American Democrats found on CNN, MSNBS, and FOX, are Wagging the Dog and minute by minute changing the already minuscule American attention span from Election Suppression back to Orange Man Bad.

Your window is closing on the necks of those who supported you.

The systems are corrupt and have been so for a while now.

We need you to start arresting them.

America needs to see high ranking Democrats and RINOS perp walked in front of the cameras.

Otherwise as Thanksgiving and Christmas arrive your voice will recede and you will eventually be colored as an angry old white bigoted Russian tax cheat who wants everyone off his lawn.

You are not alone.

We are waiting for your call.

It won’t be easy to make but unless you have a direct pipeline to The Big Fella Upstairs we are your only option.

This situation is so out of control speeches, tweets, and Judges/Justices alone aren’t going to fix this, especially when your speeches are ignored by the media, your tweets are flagged, and John Roberts is still John Roberts.

These traitors need to believe that their lives are on the line and there’s only one way to do that.

Those of us who’ve had our blood and the blood of others on our skin, swallowed our own teeth, and have taken an oath to protect and defend the Constitution are at the ready.

At this time the call has to come from you.

Simply look into the camera and tell the American People our country is under attack and any and all means are necessary for our defense or borrow from the great Thomas Jefferson:

“When in the Course of human events, it becomes necessary for one people to dissolve the political bonds which have connected them with one another, and to assume among the Powers of the earth, the separate and equal station to which the Laws of Nature and of Nature’s God entitle them, a decent respect of the opinions of mankind requires that they should declare the causes which impel them to the separation.”

The causes have been declared.

These people must be publicly separated and imprisoned or executed.

The time for dancing is over.

Biden’s Beto Male said if elected he was coming to take our guns.

Let’s not keep them waiting.

They can have them if they so choose.

One round at a time.

On you Mr. President.