Politics is War By Other Means 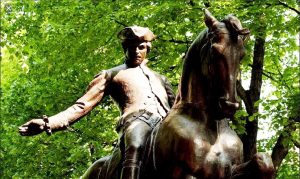 The gift of a curious mind from the Big Fella Upstairs, and the support of good parents, had me reading, writing and doing math well before Kindergarten. Because of this I was enrolled early. During 1st grade my teacher told my mom that I was bored and it would be much better if they moved me immediately to 2nd grade. As I was already a year younger than my peers my parents decided it would be better for me to stay where I was.

Long term it was a good move as athletics were a large part of my life, and I would have started college at 16 rather than 17, making competition a bit more challenging, not to mention the other parts of maturity.

Short term, to say I was disinterested in “school” would be an understatement.  It didn’t help that there were plenty of times my “teachers” would drone on about a subject only to realize what they were saying made either no sense or was the direct opposite of what I knew to be true.

Yet I was basically forced to listen (so I could pass their “tests”) to “expert adults” whose own lives were a complete disaster, ie. alcohol, debt, philandering, and even physical abuse of others, as they pretended to have knowledge of a subject they’d only cracked the book on the night before, if that.

I even had a teacher tell me to NOT read ahead in the text in an attempt to not be embarrassed with a question to which they had no answer.

Due to this behavior their “opinion” of me (grades) became irrelevant.

Fast forward a few decades and my love of reading and writing still exists. I enjoy math as well but due to Common Core it no longer provides a conduit to a good portion of the population as too many believe life can be lived in a land of drugged fantasy rather than the reality that two plus two still equals four.

Referencing the land of drugged fecal matter I happened to be in Portland Oregon (years ago) with some time to kill and wandered into a tremendous book store. After perusing the sports titles, I moved to biographies and finally ended up in the business section. For someone like me this store was Disneyland. Similar to Disneyland it was well kept and maintained on the inside and surrounded by trash, graffiti, and homeless on the outside.

After a few random titles I locked onto a book that announced it would explain the behavior of successful/self-made millionaires.

Apparently they’d done numerous case studies and had come to the conclusion that self-made successful humans all had certain things in common.

Did not have a fear of failure and didn’t care about “grades”.

Interestingly enough an entire chapter was based on why so many successful people had average or a little better than average grades.

Their theory was when these particular types of humans realized the “payoff” for all their hard work was a meaningless letter that was given a numeric value, and then added together, they quickly moved to what numeric value was needed to graduate and then did the bare minimum to achieve this while turning their attention to the things that were important to THEM.

They also realized quickly that these types of people were NOT driven by “scoreboard” or keeping up with the Joneses but in excellence, duty/ethics, and financial independence/security.

We have these types of Americans all over the United States and NONE of them are in government.

These individuals also determined that the formal “education” they were receiving was virtually worthless and would be of no benefit and even harm society in the long run, if that path continued, which is why many didn’t bother with graduate degrees that falsely stroke the ego and boastfully decorate walls.

I read this passage almost a decade ago and unsurprisingly here we are.

Our dutiful citizens are being attacked by organized Liberal gangs known as Black Lives Matter and Antifa.

Our society is being locked down and masked, due to lies about viruses, while those who perpetrate the lies run around without covers and attend events and parties wherever and whenever they choose.

Viral time limits known as curfews are being implemented as though the RONA takes a nap at 10:00 pm and awakens at 5:00 a.m.

Our elections aren’t just fraught with fraud they are completely corrupted.

False ballots, fake signatures, and votes changed from one candidate to the other isn’t new to 2020.

It’s been going on for a very long time.

Hillary was supposed to win.

The fix was in, they simply didn’t create enough fraud to cover the support at that time for Citizen Donald Trump.

This time they made sure.

No rational sober adult in the country actually believes a man who hid in his basement won this election, while at the same time Republicans took House Seats back in Florida, New York AND California.

This is virtually statistically improbable.

The fix was in from the beginning and even with that they couldn’t keep up with the support now President Donald Trump was receiving on election night.

So, through fraud new votes were found in the middle of the night, through backroom work signatures were added, and when that still wasn’t enough a four hour “break” was taken and through technology votes were switched from one candidate to the other.

Paraphrasing Clausewitz, politics is war by other means.

The war in America started a while ago and currently Freedom is losing.

The politicians in one Party are anti-American and corrupt to the core.

The politicians in the other Party are cowards and corrupt to the core.

Jason, what about Donald Trump?

President Trump is neither a Republican or a Democrat.

He’s actually an American but sadly being a billionaire businessman isn’t what the country needed.

We needed a blowtorch to incinerate and then incarcerate whatever was left of the Justice Department (Yes this now includes Bill Barr), the FBI and the CIA, while putting those with ethics, who feel duty, are willing to take significant risk, and have no fear, into these key positions to then prosecute those who have done grave harm and committed egregious acts against America.

For four years successful, serious Americans offered our services FOR FREE to our United States while watching the well intentioned but naive Trump Administration be devoured by the Swamp.

Now with a different version of a coup only months away, we are being told to put our masks back on, let our businesses die and stay locked down in our homes.

No singing, no dancing, no laughing,

Just shut your mouths and eat it!

The incredible insanity coming from our enemies toward you is frankly stunning.

It is clear these traitors will do whatever it takes to oppress others. It is my opinion that if/when you leave office they will continue to target you to show the rest of us, “This is what happens when you challenge our power. If a famous billionaire can be taken down just imagine what we will do to you.”

As I stated weeks ago I believe you only have one option and it is the only option that will actually work.

That option is US.

Although it is difficult I have been willingly to sit here and attempt to be patient as you continue forward with your legal battle against those who don’t follow laws and own the courts. It is nice to finally see some real talent and American passion come to the front in Ms. Powell and Ms. Ellis, but sadly the Supreme Court will probably NOT do anything about this fraudulent election, if they can be bothered to take the case at all.

I would LOVE to be wrong.

I’ve been doing this for almost a decade and of even greater sadness I haven’t yet been.

I cannot make a call for two reasons. I do not have a large enough platform. . .currently. . .and many in “law enforcement” would not recognize those of us who came to the defense of America as “law abiding.”

I’m not willing to lead American Patriots into, at this time, an almost guaranteed debacle.

The call has to come from you.

As a friend of mine stated, “Just one call from my president and patriots will descend upon DC like locust in the likes of a never before seen biblical plague.”

I know this will be an incredibly difficult and dangerous thing for you to do but if you truly believe, as I do, that our voting systems have been infiltrated, for quite a while now, it appears it is becoming OUR only option.

If they are ceded power in this way they will use the “law” against those of us who will fight until nothing is left but the marrow in our bones.

Some will say this is “violence” and the “rants of a crazy man.”

Let me remind all, TREASON is punishable by EXECUTION, and creating a fraudulent Federal Election is indeed Treason, never mind the binders of proof of treachery left behind by the Clintons, Bush, and Obama.

We are here Mr. President.

Simply make the call and then head to the bunker.

One of us will come get you when it is over.

For all of you Americans who are reading this now.

If this call is not made, we must regroup and hold the line.

This country cannot afford to lose any of you in a well intentioned but ill-gotten disaster of an attempt.

Debt, disease, and Democratic destruction will continue and sadly things will have to get worse to achieve Critical Mass but with it will be better opportunities for those ready to move.

Be one of those.

10 Responses to Politics is War By Other Means