Shoot Any Cop on Sight? 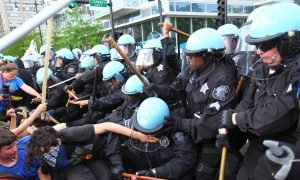 The FBI has issued an intelligence federal alert warning to the Chicago Police Department that there is a pact between over thirty gangs to shoot cops on-site.

There is a “Potential Activity Alert” from the FBI sent on August 26th, which warns law enforcement, that gangs plan “to ‘shoot on sight any cop that has a weapon drawn on any subject in public’.”

A spokesman was reported to have said, “We have been made aware of this threat by a law enforcement partner. The Chicago Police Department takes all threats against officer safety seriously and we will take all necessary measures to safeguard our officers.”

Shootings in the Chicago area and all over the country have risen at an alarming rate since the death of George Floyd. The really disturbing part of this is that many police officers have been shot and some fatally.

The alert mentions approximately thirty-six gangs, including the Latin Kings and Vice Lords, and says that “members of these gang factions have been actively searching for, and filming, police officers in performance of their official duties.”

It goes on to describe what the gangs’ intentions are allegedly planning. They want to catch an officer drawing his or her weapon on any subject, on film, and then to shoot on-sight the officer.

The gangs believe that this would harvest national media attention and that’s what they reportedly want.

On Monday David Brown, who is Chicago’s police superintendent, said that position several weeks before the Floyd protests, said on Monday that “a sense of lawlessness” has been observed by officers on the street.

Brown also mentioned that the dangers for officers have dramatically increased.

Brown said, “I think 51 officers being shot at or shot in one year, I think that quadruples any previous year in Chicago’s history. So I think it’s more than a suggestion that people are seeking to do harm to cops.”

Two Chicago police officers were shot while conducting a traffic stop over the weekend.

One of the officers who was shot in that particular incident had to undergo surgery for lung and abdominal injuries and is in serious condition. According to the Chicago Sun-Times, the other was shot in the shoulder and has been released from hospital.

A suspect in that shooting has been taken into custody.

Choosing a career in law enforcement has been, in the past, a good one. Protecting the people of this great country has always had the respect of good men and women, including myself.

I never dreamed that I’d see the day where people would want to see police officers be killed.

We live in a time where criminals are being treated with kid gloves.

Law enforcement are being put through very difficult times. They are told to stand down against so called, “peaceful protestors” who are actually domestic terrorists who are rioting, looting, setting fires and shouting insults and throwing dangerous objects at police, is not something we, as Americans, are used to.

I hope that the nation is watching where the violence is being let to happen. Democratic cities are becoming unsafe. Many people are moving to safer areas.

Let me warn those who are changing location. Don’t vote for the party that caused the destruction of where you came from.

If you want to enjoy the peace some of us are privileged to have, vote Republican. Vote RED down the line.

I write for http://DefiantAmerica.com, http://aleadernotapolitician.com/ https://magamedia.org/ and http://FreeAmericaNetwork.com & Graphic Artist & Video producer. I adore journalism. Politics seems to be my preferred genre although I do not hesitate to write anything that strikes me as interesting. Researching and finding 'Breaking News' makes my blood rush. I've written seventeen books. and over that including books in conglomeration with others. Doing graphic art design has always been fun for me. Sometimes I incorporate this talent into my articles or when a special 'feature picture' is required. You can find me tweeting on: https://twitter.com/DavedaGruber You can always find my articles on the sites I write for.
View all posts by Daveda →
Tagged David Brown, Police. Bookmark the permalink.