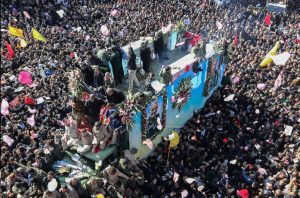 According to reports in Iranian state media, as many as forty people have died and about two hundred have been insured during the Tuesday funeral procession for Iranian General Qassem Soleimani who was killed in a U.S. led airstrike.

The meshing of people that led to the deaths and injuries occurred in Kerman, in southeastern Iran, which is the hometown of the deceased Soleiman.

The numbers were not reported initially and are still uncertain but Pirhossein Koulivand, who is the head of Iran’s emergency medical services, gave the casualty toll in an interview with state TV. The death total can go up due to injuries that are being treated.

Koulivand said, “Unfortunately as a result of the stampede, some of our compatriots have been injured and some have been killed during the funeral processions.”

Videos posted online showed people lying lifeless on a road while others were shouting and trying to help them.

Here is a video from BBC News:

This isn’t the first time that chaos irrupted during a funeral possession in Iran. In 1989 the funeral procession in Tehran of Ayatollah Ruhollah Khomeini. In that incident the remains of the deceased half naked body tumbled out of an open coffin and the scene was captured on live state television. Mourners were seen blocking the path of a truck carrying the deceased leader of the Iranian revolution. His burial shroud was torn off and his body was knocked to the ground.

The body was airlifted by military helicopter and the TV broadcast cut short. The remains were then rewrapped in traditional Muslim burial attire and then placed in a metal casket for burial.
Soleiman was killed on Thursday at Baghdad International Airport. He was the leader of the Islamic Revolutionary Guard Corps’ elite Quds Force.

Abu Mahdi al-Muhandis who was the deputy commander of Iran-backed militias known as the Popular Mobilization Forces and five other people were also killed in the U.S. airstrike.

On Monday, the death of Soleimani led to a procession in Tehran which drew over one million people in the Iranian capital. The funeral procession continued into Iran’s holy city of Qom. Another huge crowd turned out for that.

Soleimani’s remains and those of the others killed in the airstrike were brought to a central square in Kerman where the stamped occurred where he was set to be buried Tuesday. Those plans have now been delayed.

The leader of Iran’s Revolutionary Guard, Hossein Salami, spoke in Kerman and threatened to “set ablaze” places supported by the United States over the killing of Soleimani. The crowd of supporters chanted “Death to America” and “Death to Israel!”

Iran has promised retaliation to American interests for the death of Soleimani.

The chants of death, in themselves, would seem to be a promise of retaliation of sorts, but then again, Iranian extreme Muslims have been chanting threats of death for as long as I can remember.
Only time will tell what is yet to come. I can you, my readers, that Soleimani and his cohorts were very evil men and had the blood of Americans on their hands.

Sometimes the killing of those who are so evil is the only way to stop them from continuing their reign of terror that would continue to take innocent lives of Americans, our allies and even their own people.

I write for http://DefiantAmerica.com, http://aleadernotapolitician.com/ https://magamedia.org/ and http://FreeAmericaNetwork.com & Graphic Artist & Video producer. I adore journalism. Politics seems to be my preferred genre although I do not hesitate to write anything that strikes me as interesting. Researching and finding 'Breaking News' makes my blood rush. I've written seventeen books. and over that including books in conglomeration with others. Doing graphic art design has always been fun for me. Sometimes I incorporate this talent into my articles or when a special 'feature picture' is required. You can find me tweeting on: https://twitter.com/DavedaGruber You can always find my articles on the sites I write for.
View all posts by Daveda →
Tagged Hossein Salami, Iran, Pirhossein Koulivand, Qassem Soleimani. Bookmark the permalink.