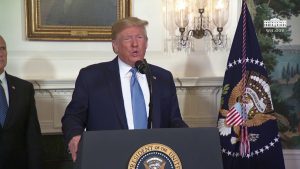 President Donald Trump, with Vice President Mike Pence standing beside him, spoke to the American people on Monday morning about the horrific murders in El Paso, Texas and Dayton, Ohio over the weekend that left at least 30 people dead.

The death toll may rise.

In the wake of the weekend shootings, Trump called for reforms at the junction of mental health and gun laws. This includes “red flag laws” to take guns from those who are deemed to be a public risk.

The president said, “Our nation is overcome with shock, horror and sorrow. We are outraged and sickened by this monstrous evil.”

Trump also condemned white supremacy in a response that the shooter in El Paso wrote a racist manifesto.

Trump said, “In one voice, our nation must condemn racism, bigotry and white supremacy. These sinister ideologies must be defeated. Hatred has no place in America.”

There was no call for changing gun laws aside from the “red flag laws.” Trump did say that he is open and ready to listen to ideas “that will actually work

The First Lady and I join all Americans in praying and grieving for the victims, their families, and the survivors. We will stand by their side FOREVER! pic.twitter.com/zOQLvAuXoh

Today, I am also directing the Department of Justice to propose legislation ensuring that those who commit hate crimes and mass murders face the DEATH PENALTY – and that this capital punishment be delivered quickly, decisively, and without years of needless delay. pic.twitter.com/BDXdpelK7F

Trump called for “cultural” changes, mentioning violent video games. he said that he has directed the Justice Department to propose legislation ensuring that those commit hate crimes and mass murders “face the death penalty and that this capital punishment be delivered quickly, decisively, and without years of needless delay.”

The president also called for policing the “dark recesses of the Internet” in a bid to catch mass murderers before they act.

Trump also said, “We must do a better job at identifying and acting on early warning signs. I am directing the Department of Justice to work in partnership with local, state, and federal agencies and social media companies to develop tools to identify mass shooters before they strike.”

Trump went on to say, “Mental illness and hatred pulls the trigger, not the gun.”

On Saturday, a gunman, Patrick Crusias, aged 20, whom Trump described on Monday as a “wicked man,” killed 22 people, the number was updated on Monday after two other individuals died in hospital, and injured 24 others after he opened fire at a Walmart in El Paso, Texas.

So far, no motive for the attack has been determined but it was reported that Betts, while in high school, was suspended for compiling a “hit list” of those he wanted to kill, and a “rape list” of girls he wanted to sexually assault.

In Dayton, Ohio, 24-year-old Connor Betts, whom Trump described on Monday, as well, as a “twisted monster,” opened fire outside a bar around 1 a.m. Sunday, killing his adult sister and eight others. Police say he was fatally shot by officers within 30 seconds.

The shooter was wearing a mask, bulletproof vest, earplugs and had at least 100 rounds of ammunition. Nine people are dead and 27 were injured.
In the wake of the shootings Democratic presidential candidates running for 2020 were quick to comment that Trump’s remarks were insufficient.

A number of Democratic lawmakers and presidential candidates have also accused the president of fueling racial tensions with his rhetoric.

The full video can be watched here: