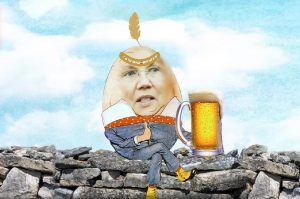 Why not at the beginning.

The Thanksgiving week started for me with a wonderful couple and a combination conversation. The first story kicked off with the man telling me a story that happened to him decades ago as a teenager on a golf course when he drove a beautiful shot into the group ahead.

One day I will write this up entirely, including the backstory with a bully who received his just desserts, but in the mean time I will continue with the abbreviated version of him later seeing the man, who he almost smashed in the back of the head, in the clubhouse.

As he began to apologize the tall fit man turned, clapped him on the shoulder, and said in a low raspy voice “never apologize for a great shot.”

With that Clint Eastwood gave a nod, smiled, and walked away.

The best part of the story may have been my friend’s imitation of The OutLaw Josey Wales.

Switching gears his fabulous wife took the reins and started to talk about the idiotic Liberals, the beer chugging Warren, and Impeachment.

We all laughed at the stupidity of the Dems, including but not limited to the second coming of Obama known as Deval Patrick and Michael “Mike” Bloomberg who once reportedly stated his place in heaven was already set aside.

There’s a joke here somewhere that starts with The Pope, Bloomberg, and Bill Cosby all expectantly standing in front of St. Peter.

I’ll have to come back to that.

So much Progressive/Rapist material . . . so little time.

Our lovely conversation ended with a statement about a Liberal “friend” to who she would enjoy “introducing” me.

I get this quite a bit.

Jason, I would love to see you talk to my (insert moronic Liberal friend, co-worker, relative here). That would be so much fun!

I generally laugh and ask do you like this (insert moronic Liberal friend, co-worker, relative here) because if you do it would be better for them if we don’t meet as Progressives are wildly insecure and also believe they live in a world where they can say anything they want without repercussion. I continued as I’ve said many times, “Liberals can’t handle the truth or being embarrassed when they are put on the spot with simple facts and immediately fall back into smug condescension. At that point I invite them to meander outside and work this out non-verbally.”

It doesn’t get prettier from there.

She laughed, implied she might enjoy seeing that too, and then asked the question we’ve all struggled to answer.

“How stupid are these people?”

Let me answer this with a quote from a Liberal writer.

“Elizabeth Warren is dynamic and brilliant.”

This was the first line written by a bonafide moron named Rick Newman.

So many oxymorons here but let’s just deal with the statement.

Elizabeth Warren is dynamic and brilliant.

One definition of dynamic is “characterized by constant change.”

Now that I think about it maybe Newman is “punking” her as she has “constantly changed” from a poor Oklahoma white girl with cheekbones, to a Native American, to a Cherokee, and finally into the last real protected Class of the Democratic Party.

The woman who wants to be President.

I’d continue on with his description of Fauxcahontas but any person who needs a sippy cup to consume a malted beverage is a lot of things.

Brilliant isn’t one of them.

Besides, it is highly unlikely the Party of Diversity, also known as the Biden, Buttigiggy, Bernie Klan, is going to nominate Warren.

There’s only one “white woman” who has a chance in the Party of Bigotry.

Hillary the Horrible is standing by awaiting a brokered convention.

A gift afforded her because Jeff Sessions and Bill Barr refuse(d) to do their job.

Prepare and make ready to do the job ourselves.

For Freedom to continue it must be done.

One way or another.