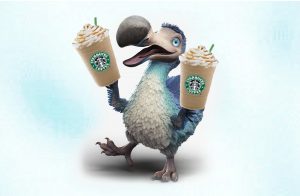 Some weeks I search for the subject.

Some weeks the subject finds me.

This week the subjects kept flying by begging to be harnessed but alas the lariat stayed on the pommel as there wasn’t enough rope on the planet to straighten out what is happening currently in these United States.

As I moved through California I was reminded of a story I’d heard as a child.

It was about a bird.

The Dodo bird to be exact.

As the story went, the Dodo was discovered on an island and when scared would shove its head into the sand.

The short version of this was as one would expect.

The reason I mention this is I was standing in a store this week ready to pay for my items.

The store had a small Starbucks inside and two women were standing and anticipating their double Frappuccino lattes that were in the making.

As they stood there with their salivary glands on override, awaiting their liquid heart attacks and straining every stitch of their clothing, I noticed they were pulling their shirts over their mouths.

I’m done explaining viruses as it appears the deaf, dumb and blind are now willingly blocking their own oxygen intake on purpose and aren’t getting the message.

Suffice it to say as I watched them struggle to stretch the neck lines of their shirts over their mouth and nose, their delicious and wildly not nutritious strokes in plastic glasses with straws, were placed in front of them.

It was then that I witnessed Darwin’s Missing Link.

Then again it could have been Jimmy Dean although neither of these two had missed any of those links in a while.

Jason how dare you!

Are you fat shaming these women?

I am factually describing what happened as my poor eyes were overwhelmed.

Besides, I’s be not da one to blame if you has shame in yo game!

Yoga pants are only going to take some people so far.

The first woman stared at both of the drinks, then walked away with her hand still trying to get her shirt over her mouth, and occasionally her nose.

The second woman quickly walked to the counter where her right paw shot out with the speed of a cheetah and snatched the first drink as though it was a canteen filled with water and she’d just come from the desert, or dessert, if you are a Liberal.

It was then that Mutual of Omaha’s Wild Kingdom presented itself.

With one hand keeping a tenuous hold on her Corona protecting technique of cloth covered mouth and sometimes nose, and her iron-like grip around the first Frappuccino, her entire body shuddered as her brain tried to find a way to pick up the second glass, without the protection of her poly cotton blend that was now holding her own spittle.

It was only a moment as her back straightened for a millisecond and then returned to its slouched state.

A decision had been made.

The CoronaVirus “protecting shirt” was released and her left claw snatched the other liquid death bomb.

She then turned and walked by multiple humans, carrying two thousand calories of crap, without her formerly needed protective armor known as the part-time shirt/face mask.

Talk about rolling the dice!

I was immediately struck by the thought of the Dodo and the possibility of their existence if high fructose corn syrup and saturated fat had been available to them twenty-four hours a day seven days a week.

Where’s Toucan Sam when you need him?

Yes, it has come to this.

Rather than discussing the brilliant mind of Adam Smith and the Invisible Hand of the Human spirit, free to fulfill its own dreams, many have succumbed to the Wretched, the Refuse, the Regurgitants of a society too stupid to understand the importance of the Freedom of Movement and too lazy to try.

“But soft, what light through yonder window breaks?”
It is the yeast, and Juliet is the Cinnabon.