The Washington Post Magazine on Tuesday published an article that depicts President Trump as having a Russian connection because of his love of Hamburgers.

How low can they go? Well, I’d say they just hit rock bottom.

At first, people seeing the headlines, thought it was a satire spoof. It wasn’t. The Russian conspiracy hoax was crazy enough and now it’s being dragged into Trump’s fast food?

Mainstream media often puts on their tinfoil hats and takes off on conspiracy theories but this one takes the cake.

From the Magazine: Even one of Trump’s favorite foods has a hidden Russia connection https://t.co/cDHpenCxvn 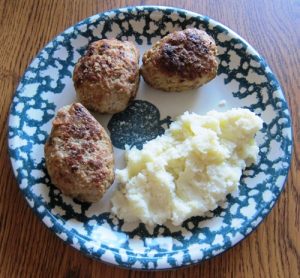 Russians enjoyed hamburgers that were served to them over a century ago. The reason was that were served in the Soviet Union in the 1930’s is that urban Soviet workers needed to be fed, and were sometimes provided with what is vaguely similar to a modern hamburger.

The Soviet people apparently enjoyed the hamburger and it was produced in mass quantities. At that time, meat and protein were in high demand.

The Russian hamburgers actually don’t look like the American hamburger. They are shaped with tapered ends and actually resemble an American football. The Russian Hamburger is not served on a bun and is traditionally served with mashed potatoes as a side dish.

In 2017, former Press Secretary, Sean Spicer, once joked that the media would find a “Russian connection” if Trump put Russian dressing on his salad.

I agreed that that was funny and even made a meme depicting the humor. 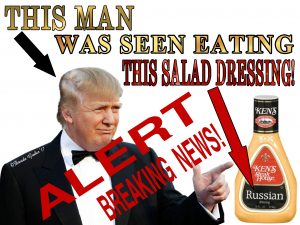 We know that Trump loves a hamburger and has served them to sport teams at the White House. But to take this and twist it into a Russian connection is preposterous.

I write for http://DefiantAmerica.com, http://aleadernotapolitician.com/ https://magamedia.org/ and http://FreeAmericaNetwork.com & Graphic Artist & Video producer. I adore journalism. Politics seems to be my preferred genre although I do not hesitate to write anything that strikes me as interesting. Researching and finding 'Breaking News' makes my blood rush. I've written seventeen books. and over that including books in conglomeration with others. Doing graphic art design has always been fun for me. Sometimes I incorporate this talent into my articles or when a special 'feature picture' is required. You can find me tweeting on: https://twitter.com/DavedaGruber You can always find my articles on the sites I write for.
View all posts by Daveda →
Tagged Russian Hamburgers, Sean Spicer. Bookmark the permalink.