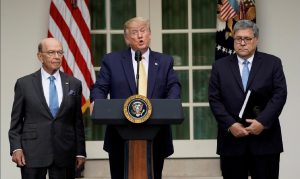 On Tuesday President Trump signed an executive order to avoid that illegal immigrants could be counted for the purposes of re-drawing congressional districts after the 2020 census is completed.

Trump put out a statement that accompanied the apportionment memorandum.

In the statement he said, “Today’s action to exclude illegal aliens from the apportionment base reflects a better understanding of the Constitution and is consistent with the principles of our representative democracy. My Administration will not support giving congressional representation to aliens who enter or remain in the country unlawfully, because doing so would create perverse incentives and undermine our system of government. Just as we do not give political power to people who are here temporarily, we should not give political power to people who should not be here at all.”

Trump said, “There used to be a time when you could proudly declare, ‘I am a citizen of the United States.’ But now, the radical left is trying to erase the existence of this concept and conceal the number of illegal aliens in our country.”

Trump went on to say, “This is all part of a broader left-wing effort to erode the rights of Americans citizens, and I will not stand for it.”

The 2020 Census counts every person living in the United States and five U.S. territories.

An official for the White House says that it would clarify that those persons in the country illegally would not be included for the redrawing process of congressional districts, which is known as apportionment.

Census counts are used to determine the allocation of seats in the House of Representatives and the number of electors in the Electoral College. It also determines the distribution of hundreds of billion dollars of federal spending.

The White House official went on to say, “Excluding illegal aliens for the purpose of apportionment reflects a better understanding of our Constitution and democratic principles.”

The Trump administration is adamant that illegal immigrants are not included in the census.

At the same time, immigrant activist groups will probably challenge the Trump administration in a legal action.

Last year the Supreme Court blocked a citizenship question from being a part of the census. They sent the question back to the lower courts because they found that the Trump administration did not have sufficient reasoning for including such a question.

Naturally, the Democrats, along with immigrant groups, disagreed because they believed that the question would discourage immigrants from responding to the census.

An executive order was later signed by the President to get an accurate count of citizens and non-citizens who are present in the country.

Information collected through the executive order, as determined by Attorney General Bill Barr, could be useful in determining the makeup of the Electoral College and congressional apportionment.

Trump later signed an executive order to get an accurate count of citizens and non-citizens present in the country.

Barr said, “That information will be used for countless purposes. For example, there is a current dispute over whether illegal aliens can be included for apportionment purposes. . . . We will be studying this issue.”

Once again we have two different opinions here. Republicans, don’t want illegal immigrants to contribute to the drawing of lines for the Electoral College or contributing to the allocation of seats in the House of Representatives but Democrats seem to be on the other side of the argument.

Could Democrats believe that they could benefit from lines drawn that include illegal immigrants in the population? You’d better believe it.

I write for http://DefiantAmerica.com, http://aleadernotapolitician.com/ https://magamedia.org/ and http://FreeAmericaNetwork.com & Graphic Artist & Video producer. I adore journalism. Politics seems to be my preferred genre although I do not hesitate to write anything that strikes me as interesting. Researching and finding 'Breaking News' makes my blood rush. I've written seventeen books. and over that including books in conglomeration with others. Doing graphic art design has always been fun for me. Sometimes I incorporate this talent into my articles or when a special 'feature picture' is required. You can find me tweeting on: https://twitter.com/DavedaGruber You can always find my articles on the sites I write for.
View all posts by Daveda →
Tagged Electoral College, executive order. Bookmark the permalink.