Trump: US Will Designate Antifa a Terrorist Group 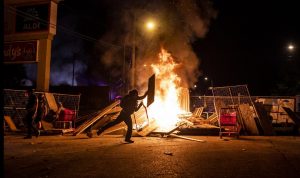 On Sunday it became clear that President Trump has advised the U.S. government will designate Antifa a terrorist group.

Antifa is a far-left organization that has been causing havoc in cities across America, especially in the past few days after the alleged murder of George Floyd on May 25th.

Floyd, who is a black man, was unarmed as an officer, Derek Chauvin, kneeled on his neck for more than 8 minutes while he screamed that he could not breathe in an incident which was caught on video in Minneapolis, Minnesota.

President Trump tweeted this on Sunday:

The United States of America will be designating ANTIFA as a Terrorist Organization.

Peaceful protests against police began not long after the alleged murder that happened after Chauvin put his knee on the neck of Floyd with three other officers who were involved. Two of the three other officers were seen on video kneeling on Floyd as another kept people away while they were pleading for Floyd’s life.

Accusations were tossed around against both far-left extremists and white nationalists.

Trump labeled the rioters as Antifa.

On Saturday Trump tweeted this:

It’s ANTIFA and the Radical Left. Don’t lay the blame on others!

Pompeo said, “I think it still remains to be seen exactly how” the situation devolved from peaceful protests to something entirely different.”

In the meantime, Minnesota Attorney General Keith Ellison told “Fox News Sunday” he has evidence that people from out-of-state were involved in the violent behavior that took place in Minneapolis. He was not specific on whether rioters were affiliated with a particular group or ideology.

Senator Bill Cassidy, R-La., sponsored resolution that was co-sponsored by Senator Ted Cruz, R-Texas, to designate Antifa as a domestic terrorist organization in 2019.

The resolution came about in response to threats and actions that Antifa-affiliated individuals made against ICE officials and journalist Andy Ngo.

If anyone wants me to believe that people who came in droves from other states, some bussed in, and do not peacefully protest but set fires to vehicles and buildings and loot stores are protesting, you are sadly mistaken.

A terrible thing occurred when Floyd was declared dead but it is in the best interest of everyone concerned that justice be served in a timely manner.

More crimes from arson and destruction as well as officers getting hurt and the loss of life that has come about is not the solution. In fact, uncalled for violence makes matters worse.

I write for http://DefiantAmerica.com, http://aleadernotapolitician.com/ https://magamedia.org/ and http://FreeAmericaNetwork.com & Graphic Artist & Video producer. I adore journalism. Politics seems to be my preferred genre although I do not hesitate to write anything that strikes me as interesting. Researching and finding 'Breaking News' makes my blood rush. I've written seventeen books. and over that including books in conglomeration with others. Doing graphic art design has always been fun for me. Sometimes I incorporate this talent into my articles or when a special 'feature picture' is required. You can find me tweeting on: https://twitter.com/DavedaGruber You can always find my articles on the sites I write for.
View all posts by Daveda →
Tagged Antifa, Bill Cassidy, Mike Pompeo, President Trump. Bookmark the permalink.