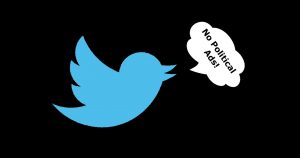 You won’t be seeing political advertisements on Twitter after late November.

Twitter has said that it would be banning all political advertising because social media companies give advertisers an unfair advantage by spreading targeted deceptive messages.

Earlier in October Facebook took some heat for disclosing that it will not fact-check ads by politicians nor will they seek facts advertised by their campaigns.

This would allow those purchasing ads to lie freely.

CEO Mark Zuckerberg had told Congress last week that politicians have the right to free speech on Facebook.

The company is apparently recognizing that advertising on social media offers an unfair level of targeting when compared to other mediums.

We’re well aware we‘re a small part of a much larger political advertising ecosystem. Some might argue our actions today could favor incumbents. But we have witnessed many social movements reach massive scale without any political advertising. I trust this will only grow.

The big chunk of political advertising dollars in the U.S. mostly goes to television ads. It appears that TV will still be getting the majority of the money with Twitter cutting off their need to spend on their social media.

I write for http://DefiantAmerica.com, http://aleadernotapolitician.com/ https://magamedia.org/ and http://FreeAmericaNetwork.com & Graphic Artist & Video producer. I adore journalism. Politics seems to be my preferred genre although I do not hesitate to write anything that strikes me as interesting. Researching and finding 'Breaking News' makes my blood rush. I've written seventeen books. and over that including books in conglomeration with others. Doing graphic art design has always been fun for me. Sometimes I incorporate this talent into my articles or when a special 'feature picture' is required. You can find me tweeting on: https://twitter.com/DavedaGruber You can always find my articles on the sites I write for.
View all posts by Daveda →
Tagged Jack Dorsey, Mark Zuckerberg, Twitter. Bookmark the permalink.