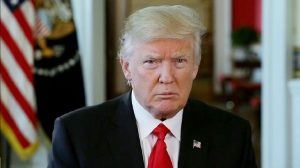 On Tuesday the White House has declared that subscriptions to The New York Times and The Washington Post will not be renewed.

President Trump had given some information to Sean Hannity on his nightly show, “Hannity” that aired on FOX News earlier this week, on Monday, when he referenced to the newspapers and hinted that that he would “probably terminate” both papers and called them “fake.”

Trump said to Hannity, “The media is corrupt. Not all media is. Look, I know some, some great people, including you. But I know some great journalists. Look, they gave Pulitzer Prizes to people that got it wrong. Okay. All these people for doing it from The New York Times, which is a fake newspaper, we don’t even want it in the White House anymore. We’re going to probably terminate that and The Washington Post.  They’re Fake. But you take a look at The New York Times and you take a look at the kind of reporting they do. It was all ˗˗it turned out to be ˗˗ all wrong.”

Trump also put down the Times for its coverage of him during the 2016 election. He described an “apology” for covering him “so badly.”

Trump also said, “After the election, The New York Times apologized for their coverage because they were covering me in such a way. So when I won, they actually apologized to their subscribers because they were losing thousands and thousands of subscribers. The New York Times wrote an apology. Nothing else. You know they’re saying, ‘well, it wasn’t really an apology’. It was because they covered me so badly. And then when I said, sort of interesting, I think I hope I say, you know, the good news is now be covered fairly again.”

Both of the newspapers have been in the crosshairs with Trump.

The Times have been described by Trump as “failing” and putting a label of the “Amazon Washington Post” on the Post. The Post is owned by billionaire and Amazon founder, Jeff Bezos.

Ultimately, some confusion arose because on Tuesday, Press Secretary Stephanie Grisham told “Politico” that the president was referring to subscriptions “which we won’t be renewing,” as opposed to terminating reporters from the papers’ access to the White House.

Allegedly, reporters were speaking out by throwing information out that they were going to be denied access to the White House.

It allegedly appears that reporters have once again misconstrued the facts by interrupting them as a personal attack as opposed to an entity merely cancelling a subscription to a newspaper.

I write for http://DefiantAmerica.com, http://aleadernotapolitician.com/ https://magamedia.org/ and http://FreeAmericaNetwork.com & Graphic Artist & Video producer. I adore journalism. Politics seems to be my preferred genre although I do not hesitate to write anything that strikes me as interesting. Researching and finding 'Breaking News' makes my blood rush. I've written seventeen books. and over that including books in conglomeration with others. Doing graphic art design has always been fun for me. Sometimes I incorporate this talent into my articles or when a special 'feature picture' is required. You can find me tweeting on: https://twitter.com/DavedaGruber You can always find my articles on the sites I write for.
View all posts by Daveda →
Tagged Stephanie Grisham, The new York Times, The Washington Post. Bookmark the permalink.