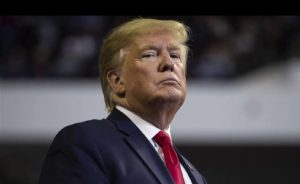 On Thursday a legal opinion by the Government Accountability Office (GAO) said that President Trump’s administration broke the law when defense aid was withheld to Ukraine.

The Ukraine aid, which is the meat of the president’s impeachment trial, was allegedly withheld, according to the GAO, without the right to hold it back.

There was $214 million allocated to the Department of Defense for security assistance. It was appropriated by Congress and for that reason the administration, according to the GAO, did not have the right to hold it back because it happened to disagree with its allocation.

The opinion was in writing and said, “Faithful execution of the law does not permit the President to substitute his own policy priorities for those that Congress has enacted into law. [The Office of Management and Budget] OMB withheld funds for a policy reason … not a programmatic delay. Therefore, we conclude that the OMB violated the ICA [Impoundment Control Act].”

On Thursday the OMB made it clear that it disagreed with the GAO report.

OMB spokesperson Rachel Semmel said, “We disagree with GAO’s opinion. OMB uses its apportionment authority to ensure taxpayer dollars are properly spent consistent with the President’s priorities and with the law.”

Now it becomes more clear as to why Senate Minority Leader Chuck Schumer, D-N.Y., was demanding that the Senate consider additional documents as evidence in the upcoming impeachment trial.

Schumer said, “The GAO opinion makes clear that the documents we requested in our letter last month are even more needed now because GAO confirmed the president broke the law. All senators will get a chance to vote to obtain these documents next week.”

The Trump administration, through the OMB, withheld a total of about $400 million of security assistance from Ukraine last summer.

The opinion also raised constitutional concerns about the lack of cooperation from the Trump and his executive branch officials in conjunction with the GAO’s investigation.

In the opinion’s conclusion a reluctance to provide a fulsome response, on the part of the OMB and the State Department. The opinion’s author, GAO General Counsel Thomas H. Armstrong, inferred that there was interference with the GAO’s oversight role on behalf of Congress.

This is at the core of the impeachment trial that has become the focus of lawmakers. It started after Trump asked Ukrainian President Voldomyr Zelensky to allegedly investigate the family of his 2020 rival, Joe Biden while the White House allegedly was withholding an Oval Office visit from Zelensky in exchange for that investigation.

That situation originally started the whispers about a “Quid Pro Quo” that soon was changed to bribery and then to abuse of power and obstruction of Congress.

I believe that the OMB has got this right. What say you? I’d love to hear your opinion.

I write for http://DefiantAmerica.com, http://aleadernotapolitician.com/ https://magamedia.org/ and http://FreeAmericaNetwork.com & Graphic Artist & Video producer. I adore journalism. Politics seems to be my preferred genre although I do not hesitate to write anything that strikes me as interesting. Researching and finding 'Breaking News' makes my blood rush. I've written seventeen books. and over that including books in conglomeration with others. Doing graphic art design has always been fun for me. Sometimes I incorporate this talent into my articles or when a special 'feature picture' is required. You can find me tweeting on: https://twitter.com/DavedaGruber You can always find my articles on the sites I write for.
View all posts by Daveda →
Tagged 1CA, Chuck Schumer, GAO, OMB, Rachel Semmel, Voldomyr Zelensky. Bookmark the permalink.