Will Pelosi Give Up Articles of Impeachment to Senate? 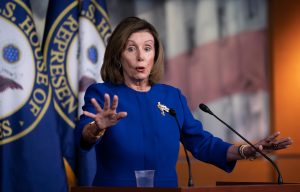 On Friday Speaker of the House Nancy Pelosi said that she’ll send impeachment articles to the Senate next week.

Pelosi, even though the impeachment of President Trump was, as far as Democrats were concerned, urgent and keeping Trump in office was a security risk to the U.S. could not have been anywhere near as urgent as they made it sound.

House Democrats voted on the articles of impeachment on December 18th. Pelosi has been holding onto them since.

After trying to get the Majority Leader of the Senate Mitch McConnell to agree with the way she wants the trial held, Pelosi must have come to terms with the fact that she doesn’t control the Senate nor its rules.

Pelosi wrote a letter to her colleagues explaining what they should expect next.

Pelosi wrote,  “I have asked Judiciary Committee Chairman Jerry Nadler to be prepared to bring to the Floor next week a resolution to appoint managers and transmit articles of impeachment to the Senate. I will be consulting with you at our Tuesday House Democratic Caucus meeting on how we proceed further.”

This past week some Democrats were making their frustrations heard over the speaker’s approach to the matter.

In any case, Pelosi is still pressing on about important new information on the Ukraine controversy which is at the heart of impeachment.

The memo reads, “I am very proud of the courage and patriotism exhibited by our House Democratic Caucus as we support and defend the Constitution.”

Well, the Constitution hasn’t been brought up by Democrats with this much reference for as long as I can remember. When it becomes a focus of the Democrats to keep citing the Constitution, you can be sure they are using it as a talking point to stress that they are doing everything in a constitutional or legal manner.

Several Democrats lawmakers have voiced their opinions and are not pleased with this delay.

Some of those who were not happy with the delay are, Senator Joe Manchin, D-W.Va., Senator Dianne Feinstein, D-Calif., Senator Angus King, D-Maine; Senator Richard Blumenthal, D-Conn.; and Senator Chris Coons, D-Del.

Pelosi made an official announcement that supported her memo.

Senator Chuck Grassley, R-Iowa, was early to jump on the delay tactic.

Grassley said in a statement of his own, “Speaker Pelosi threw the United States Congress into unnecessary chaos with this pointless delay. From the beginning, it’s been unclear what the goal of this hurry-up-and-wait tactic was or what the country stood to gain. We now know the answer was nothing.”

The Iowa senator went on to say, “We’ve had three weeks of uncertainty and confusion, causing even more division. Regardless, I will take my role as a juror seriously and review the evidence presented by both sides before making any determination.”

The next step for Pelosi will be to determine who will serve as House managers to prosecute the case against the president in the Senate trial.

The trial in the Senate may begin next week.

This whole facade will go on until Majority Leader of the United States Senate Mitch McConnell , R-Ky., either calls for a vote or the whole case gets dismissed.

I write for http://DefiantAmerica.com, http://aleadernotapolitician.com/ https://magamedia.org/ and http://FreeAmericaNetwork.com & Graphic Artist & Video producer. I adore journalism. Politics seems to be my preferred genre although I do not hesitate to write anything that strikes me as interesting. Researching and finding 'Breaking News' makes my blood rush. I've written seventeen books. and over that including books in conglomeration with others. Doing graphic art design has always been fun for me. Sometimes I incorporate this talent into my articles or when a special 'feature picture' is required. You can find me tweeting on: https://twitter.com/DavedaGruber You can always find my articles on the sites I write for.
View all posts by Daveda →
Tagged Chuck Grassley, Jerry Nadler, Mitch McConnell, Nancy Pelosi. Bookmark the permalink.