Can RBG Have Her Way from the Grave? 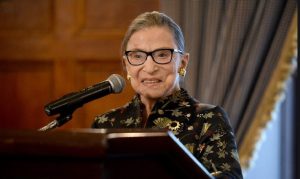 The blame for the controversy over filling the empty seat on the Supreme Court with the death, on Friday, of icon Ruth Bader Ginsburg, should be handed to a former Senate Leader Harry Reid.

He changed the rules. In November 2013, the then-Democratic Senate majority eliminated the filibuster for executive branch nominees and judicial nominees except for Supreme Court nominees by invoking the so-called nuclear option.

The nuclear option is a parliamentary procedure that allows the United States Senate to override a standing rule of the Senate, such as the 60-vote rule to close debate, by a simple majority of 51 votes, rather than the two-thirds supermajority normally required to amend the rules.

The term “nuclear option” is an analogy to nuclear weapons being the most extreme option in warfare. In November 2013, Senate Democrats led by Harry Reid used the nuclear option to eliminate the 60-vote rule on executive branch nominations and federal judicial appointments, but not for the Supreme Court.

The Republican majority responded by changing the rules to allow for filibusters of Supreme Court nominations to be broken with only 51 votes rather than 60.

Confirmation by the Senate allows the President to formally appoint a candidate to the court.

They say, be careful what you wish for. Republicans re-captured the judicial appointment process by winning the Senate in 2014 and the White House two years later. In April 2017, they used the same nuclear option to prohibit filibusters of the one position left alone by Democrats which was the Supreme Court. As a result, Justices Neil Gorsuch and Brett Kavanaugh were confirmed and will be serving for decades to come and President Trump may get another justice through this term.

Chuck Schumer said in 2017 that he regretted Reid’s action. I don’t generally ever agree with Schumer but he was right. The rule helps the party with the majority.

Senate Majority Leader Mitch McConnell could bring the nomination to the Senate floor and approve it with a simple majority vote.

The President signaled on Saturday that he would formally name someone to fill the vacancy in the near future.

All the Senate needs is 50 votes and Vice President Mike Pence can be the deciding vote.

Timing is tricky. The Senate can start the process to nominate a Justice and then after November 3rd, the Senate can vote during a lame duck session. But if I recall correctly, Bader-Ginsburg’s confirmation took forty-four days.

Bader-Ginsburg dictated a note before she died. She said in it that she did not want another Justice confirmed until there was a new president.

I’m sorry, but that isn’t her call to make from her deathbed or from the grave.

The woman, may she rest in peace, should have stepped down from the Supreme Court when she became sick with pancreatic cancer.

She stayed on the court to spite Trump because she didn’t like him.