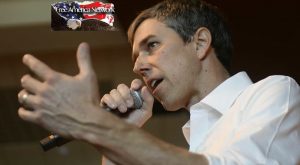 Have you ever heard of a child eating dirt? I have but it didn’t seem healthy or something a sane adult would do.

Adults can sometimes eat their own words, humble pie or even eat crow but these metaphors are just that; metaphors. We don’t have to actually digest the similes.

O’Rourke raised $80 million for the Senate race against Cruz and is rejuvenating himself by eating dirt to draw energy.

Beto wrote a 3,000-word profile on himself and it reads, “In January, Beto hit the road, much as his father had done before him, and drew energy from the people he met, and — on one stop in New Mexico he didn’t write about in his blog — by eating New Mexican dirt said to have regenerative powers.”

It also reads, “He brought some home for the family to eat, too.”

I wonder if Beto’s family all ate dirt. Someone told me on Twitter that America needs illegal immigrants to pick crops to supply the American people with food. I did argue the point in my reply tweet.

Well, if Beto is correct in his assumption that eating dirt is good for us, maybe we don’t need food? We can all just eat that yummy dirt.

I write for http://DefiantAmerica.com, http://aleadernotapolitician.com/ https://magamedia.org/ and http://FreeAmericaNetwork.com & Graphic Artist & Video producer. I adore journalism. Politics seems to be my preferred genre although I do not hesitate to write anything that strikes me as interesting. Researching and finding 'Breaking News' makes my blood rush. I've written seventeen books. and over that including books in conglomeration with others. Doing graphic art design has always been fun for me. Sometimes I incorporate this talent into my articles or when a special 'feature picture' is required. You can find me tweeting on: https://twitter.com/DavedaGruber You can always find my articles on the sites I write for.
View all posts by Daveda →
Tagged Beto O'Rourke, Robert Francis O'Rourke, Ted Cruz. Bookmark the permalink.