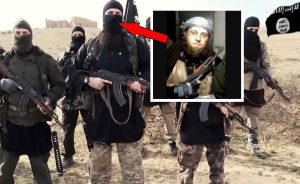 The spokesman for ISIS, Abu Hassan al-Muhajir, who is considered to be a successor to Abu Bakr al-Baghdadi is dead.

Al-Muhajir, who is alleged to be the “number two” to al-Baghdadi was targeted and killed, in northeast Syria in the Aleppo province, by U.S. forces.

The Islamic State spokesman was killed in an operation that closely followed the raid in which the militant group’s leader, al-Baghdadi, died.

Al-Muhajir had been considered a possible successor until he was targeted. Muhajir had married Baghdadi’s daughter.

The top Kurdish leader for the Syrian Democratic Forces, Gen. Mazloum, the main U.S. ally against ISIS tweeted this:

Following the previous ops, a senior assistent for al- Bagdadi is called Abu Hesen al Mouhjir was targeted in a village named Ein al Baat near Jaraboul city, the mission was conducted via direct coordination of SDF Intel & US military apart the ongiong ops to hunt ISIS leaders.

ISIS has yet to confirm news of Baghdadi’s death, or give any indication of who will succeed him. But some analysts and U.S. officials say the group is sure to have planned for its leader’s death.

Now that al-Muhajir is dead another possible successor is Iraqi militant Hajji Abdullah, who was added to the U.S. Treasury’s Rewards for Justice list in August.

Abdullah is known to be one of Islamic State’s most senior ideologues and the one who helped drive and justify the abduction, slaughter, and trafficking of the Yazidi religious minority in northern Iraq.

This presumed “third in line” is also believed to oversee some of the group’s global terrorist operations. That would make him a rather big catch.

A five million dollar bounty has been offered for information leading to his capture.

It’s not clear if the bounty is in effect if he is caught dead or alive.

I write for http://DefiantAmerica.com, http://aleadernotapolitician.com/ https://magamedia.org/ and http://FreeAmericaNetwork.com & Graphic Artist & Video producer. I adore journalism. Politics seems to be my preferred genre although I do not hesitate to write anything that strikes me as interesting. Researching and finding 'Breaking News' makes my blood rush. I've written seventeen books. and over that including books in conglomeration with others. Doing graphic art design has always been fun for me. Sometimes I incorporate this talent into my articles or when a special 'feature picture' is required. You can find me tweeting on: https://twitter.com/DavedaGruber You can always find my articles on the sites I write for.
View all posts by Daveda →
Tagged Abu Bakr al-Baghdadi, Abu Hassan al-Muhajir, Hajji Abdullah, ISIS. Bookmark the permalink.