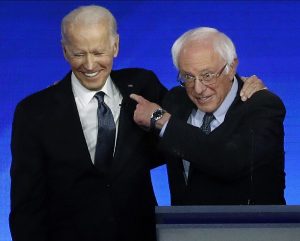 Recently this question was proffered.

Can you explain in short order (insert Bloomberg joke here) the difference between a Moderate Democrat and a Liberal Democrat?

One is an idiot, the other is a moron.

Oh now Jason what is with the name calling?

I am not calling anyone names.

These are terms with specific definitions found in any dictionary.

Idiot is defined as “an utterly foolish or senseless person.”

Anyone voting for Mandela Biden is by definition an utterly foolish or senseless person.

The man, or whatever his gender is today, doesn’t know which State he is in, mistakes days of the week, and cannot finish simple self-evident, uh people and uh things, yeah things . . . you know the things.

A moron is described as “a person who is notably stupid or lacking in good judgment.”

Of course no one likes to be called an idiot but when Liberals choose someone to be in charge of the nuclear codes who tells a paraplegic to stand up and states that JOBS is a three letter word, well, it is what it is.

Of course no one likes to be referred to a moron but when you support someone who tries to tell you that Fidel Castro did some good things and you’ll be better off when he taxes you at exorbitant rates, well, moron might be an understatement.

What about Tulsi Gabbard?

For some reason some “Republicans and Independents” are infatuated by her.

She supports Bernie The Communist Sanders so not sure what the draw is but hang on a second . . . HERE’S YOUR SIGN!

If A is a Communist, and B supports A, then B is a moron.

Of course we lost the Liberals, err, morons with the usage of logic and letters but at least the morons know which State they are in . . . most of the time.

It’s called the State of Denial.

On a completely different note I am starting to really wonder about Utah.

Mitt Romney for the Senate and Bernie Sanders for President?

Bernie is on record stating that women fantasize about being raped simultaneously by three different men WHILE having sex and the Mormons said give us more of that?

Sounds a bit bizarre to have the Muslims and apparently some of the Latter-day Saints supporting the same candidate but that Pierre Delecto is a weird guy.

Speaking of weird guys Mini Mike, Tiny Steyer, Buttigiggy and Elena all decided that no one likes them, no one really really likes them and shut down their “campaigns”.

The only ones to notice were Californians who felt it was safe to return to watching television.

Chuck Schumer decided the way to support the act of abortion was to threaten the newest members of the Supreme Court.

No one should be surprised.

If Liberals are willing to kill, dismember and sell baby parts then knocking off a couple of Justices shouldn’t be that big of a deal.

Maybe they can hire Jussie Smollet to “act” the part with a few props.

A sandwich, some rope, and a couple of African-Nigerians.

Who down with CCC!

Clap back Chuckles stood in front of the cameras and talked about releasing the whirlwind and then hid in the corner with his Brooklyn binky and said he didn’t mean it.

Charlie and the Cuckoo Factory.

Working as hard as he can to catch up to the Ocasio-Cortez five cans short of a six-pack club.

Finally the propagandized media decided that the stock markets were climbing because Quid Pro Quo Joe was able to get his supporters to the polls on Thursday, err, Tuesday and take the lead over Bolshevik Bernie.

An idiot and a moron.

The perfect measurement of Barack’s legacy.

It’s clear that the job is too much for them, as it was for Obama, and causing anxiety.

One phone call to Hillary’s husband and all their cares will drift away.

At least for as long as it takes to “smoke” a cigar.