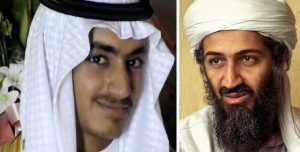 A strong message has been sent to terrorist groups who would target the US. President Trump has confirmed that Hamza bin Laden is dead.

Hamza is the son of the mastermind of the 9/11 terror attacks and former Al-Qaeda leader Osama bin Laden. Hamza was also a high-ranking Al Qaeda member who had been groomed for terrorism since childhood.

The younger bin Laden was believed to be in his early 30s at the time of his death. He was married to the daughter of Mohammed Atta, the lead hijacker in the September 11 attacks.

According to a statement given by the White House on Saturday, Hamza was killed in a United States counterterrorism operation in the Afghanistan/Pakistan region.

This comes about three days after the 18th anniversary of the September 11th terror attacks.

The statement read, “The loss of Hamza bin Laden not only deprives Al Qaeda of important leadership skills and the symbolic connection to his father but undermines important operational activities of the group.  Hamza bin Laden was responsible for planning and dealing with various terrorist groups.”

Hamza’s death was reported on July 31st but skepticism surrounded the report. Terrorist leaders are reported to have died and then they resurface later making it difficult for people to believe reports of their deaths.

Osama bin Laden, along with others, plotted the September 11, 2001 attacks on American soil. The elder bin Laden was killed by Navy SEALs in a raid on a house in Abbottabad, Pakistan in 2011.

The father and his favorite son are now together in death.

I write for http://DefiantAmerica.com, http://aleadernotapolitician.com/ https://magamedia.org/ and http://FreeAmericaNetwork.com & Graphic Artist & Video producer. I adore journalism. Politics seems to be my preferred genre although I do not hesitate to write anything that strikes me as interesting. Researching and finding 'Breaking News' makes my blood rush. I've written seventeen books. and over that including books in conglomeration with others. Doing graphic art design has always been fun for me. Sometimes I incorporate this talent into my articles or when a special 'feature picture' is required. You can find me tweeting on: https://twitter.com/DavedaGruber You can always find my articles on the sites I write for.
View all posts by Daveda →
Tagged Hamza bin Laden, Osama bin Laden. Bookmark the permalink.