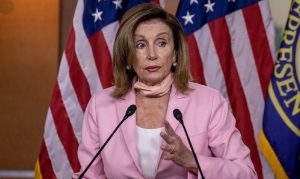 On Friday Speaker of the House Nancy Pelosi once again made it clear that she didn’t think that Democratic presidential nominee Joe Biden should debate President Trump.

She exclaimed that Trump and his “henchmen” have no “fidelity” to facts or the truth.

Pelosi had an interview on “Morning on CBS” and was asked whether she still believed the former vice president should skip the three scheduled debates.

Pelosi answered, “Oh, I do. Not that I don’t think he’ll be excellent. I just think that the president has no fidelity to fact or truth and, actually in his comments the last few days, no fidelity to the Constitution of the United States.”

She went on to say, “He and his henchmen are a danger, with their comments, are a danger to our democracy. So I don’t want to give him – I mean, why bother? He doesn’t tell the truth.”

At that time she said that she didn’t want the forums to become an “exercise in skullduggery.”

Pelosi said at that time, “I wouldn’t legitimize a conversation with him, nor a debate in terms of the presidency of the United States. Now I know that the Biden campaign thinks in a different way about this.”

The Biden campaign did not agree with Pelosi.

Biden’s response to this was, “As long as the commission continues down the straight and narrow as they have, I’m going to debate him. I’m going to be a fact-check on the floor while I’m debating him.”

The former Vice President can’t even remember his name, where he is and he has trouble just reading a speech off of a teleprompter.

I don’t, as a rule, ever agree with Pelosi. In her opinion on that Biden shouldn’t debate Trump, I must admit that it would be to Biden’s advantage to not debate Trump.

Actually, I’m looking forward to Biden bumbling and stumbling on his words during a debate but I have this fear that I won’t get to eat my popcorn.

My reason for this is that I am concerned if the debate will go on as planned.

Will Biden come down with COVID? Will an emergency be created by the Democrats to prevent the debate? Could there be massive loss of power from a potential enemy? Will the Russians or Chinese invade the U.S.?

I know, I’m panicking because I want the debate to be televised as planned and I don’t trust Democrats nor do I trust their allies in the mainstream media.

Biden’s handlers and the media must know that Biden cannot keep up with our President.

That brings to mind that if the debate goes as planned Biden will have notes to read and already knows the questions. That didn’t help Hillary Clinton when she went up against Trump. There’s that one moment that I’ll never forget when Trump told her that she would have been in jail.

I also find it problematic that there will be no drug tests before the Trump-Biden debate. Biden would not get good results.

My distrust of the Democrats makes me also wonder if there will be a microphone in Biden’s ear giving him the answers.

Okay, that may not help Biden too much because his concentration won’t let him absorb Chris Wallace asking questions, Trump possibly answering or cutting off Biden and a microphone telling him what to say.

Those are too many confusing factors for a man who forgets who he is or where he is.

I want my next Tuesday night on September 29 at 9:00 PM Eastern time to be my time to be entertained in front of my television and have my popcorn.

I write for http://DefiantAmerica.com, http://aleadernotapolitician.com/ https://magamedia.org/ and http://FreeAmericaNetwork.com & Graphic Artist & Video producer. I adore journalism. Politics seems to be my preferred genre although I do not hesitate to write anything that strikes me as interesting. Researching and finding 'Breaking News' makes my blood rush. I've written seventeen books. and over that including books in conglomeration with others. Doing graphic art design has always been fun for me. Sometimes I incorporate this talent into my articles or when a special 'feature picture' is required. You can find me tweeting on: https://twitter.com/DavedaGruber You can always find my articles on the sites I write for.
View all posts by Daveda →
Tagged Joe Biden, Nancy Pelosi, President Trump. Bookmark the permalink.