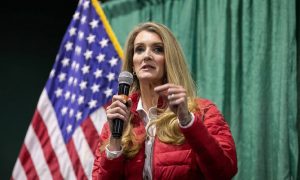 The Georgia Senate race will determine the majority in the Legislative Branch of government and a the incumbent, Senator Kelly Loeffler has tested positive for coronavirus.

Loeffler will be quarantining before the January 5th runoff in that state.

The control of the Senate rests with two GOP candidates, one being Loeffler and the other being Republican U.S. Sen. David Perdue, also of Georgia.

Loeffler tested negative negative Friday morning with a rapid-results test before two campaign events she held with Vice President Mike Pence but after taking a PCR test Friday, it came back positive later on during the day.

PCR is a diagnostic test, which means that it can be used to determine whether you currently have an active coronavirus infection.

Besides Pence, Loeffler has also had recent contact with Perdue as well as U.S. Sen. Tom Cotton, R-Ark.

Campaign spokesman Stephen Lawson said, “Senator Loeffler followed CDC guidelines by notifying those with whom she had sustained direct contact while she awaits further test results. She has no symptoms and she will continue to follow CDC guidelines by quarantining until retesting is conclusive and an update will be provided at that time.”

The tests have been disputed because of results being different on any given day.

People with no symptoms can still be carriers of the disease but they don’t necessarily take tests.

I have not been tested and you can be sure that unless I develop symptoms that are undeniably this flu, which attacks the lungs, I will not be getting tested.

With all the corruption that goes on in America, at this time, I trust very few people. That’s right, I do not trust the tests to be one hundred percent accurate.

If I may say so, my belief is that anything can be manipulated and I will never dismiss the possibility of human error whether it is accidental or not.

I hope Loeffler is feeling well and the next test that she takes comes back negative.

We need control of the Senate. May God bless Loeffler and Perdue and may voters be guided to do what is right and fair and bring them to victory.

And, of course, God bless America.