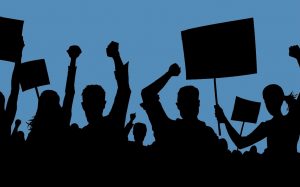 As a child the popular belief was that the discussion of sex, politics, and religion in mixed company was never to occur.

This then morphed into all people have an opinion, and regardless of facts, their opinion was valid.

Finally, the everyone gets a trophy parental generation taught their children that political correctness, otherwise known as stupidity, was the new mode of communication.

The kids were also introduced to new verbiage.

American was racist but African, Asian, Hispanic, Latino, and Native were cool.

Nigger was out and Nigga was in!

Whore was done and Ho was da bomb!

Gay was gone and Queer was Kwon!

Tramp stamps, face tattoos and nose rings for all!

Every sentence, phrase, or utterance had to have a “like” a “you know” or an “uh”.

The term Bigotry was replaced by Diversity, depending upon the color of one’s skin.

Everyone else was diverse.

Oral sex wasn’t sex and the definition of “is” became fluid along with everyones gender.

Which room to use to urinate or defecate became so confusing to the Progressives they finally collapsed in mental exhaustion and began pooping and peeing on the streets, crack laced needles be damned.

Criminal behavior had become so rampant in Democrat cities that a new fix had to be found and the Dems were up to the challenge.

They decriminalized everything, especially the behavior of criminal foreign nationals, which has led to even more Americans and legal immigrants being murdered.

The Liberal fix to stop the murder of United States Citizens by foreign nationals?

Make everyone an American and then allow them to chain migrate their parents, grandparents, aunts, uncles, cousins, kids, friends, local barber, and ex-girlfriends.

While all this was taking place Nancy Pelosi decided Donald Trump was a danger to America, impeached him, and then refused to try and have him removed.

Bat-feces crazy Pelosi then approved President Trump’s USMCA and invited him to speak to the Nation.

Finally our refusal to discuss subjects over the last few generations has millions believing that they control the climate here on planet Earth.

Sixteen year old Swedish dupes, twenty-eight year old bartenders, and too many Liberal Boomers to count all believe human consumption has shortened the lives of humans to twelve years, significantly less if President Trump is re-elected.

Liberals think Crust is the worst part of pizza, Mantle is related to Mickey, and the Core needs to be Common.

They cannot explain the basic structure of the Earth even though it was just given to them.

What they are certain of is that we as Americans are killing the planet with our appetites for gas, beef, and bullets.

Their fix for this?

My beginning premise was that we were taught to talk to each other differently and after the last thirty years there is at least one thing that certainly is true.

Talking to Liberals, in any fashion, isn’t working.

Whenever you are ready Virginia, we are at your service.

You’ll make the inevitable trip to Washington D. C. significantly shorter for us all.