The Great Experiment is Under Attack 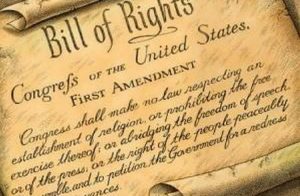 According to the “polls” the majority think, “Trump doesn’t respect Democratic norms.”

It’s a good thing the United States isn’t a Democracy.

I also saw a comment from another “intellectual” that stated a Republic is synonymous with Democracy.

Simply stated Democracy is the Majority over the Minority or Two against One carries the day.

A Republic is the evolution from Democracy that stops the slide into Tyranny.

This is called Socratic Theory.

James Madison and Alexander Hamilton HATED Democracy and wanted the Great Experiment to be a Republic.

A Constitutional Republic to be exact.

They were so concerned with this they wrote the Federalists Papers which were then used to outline the United States Constitution, specifically the first Ten Amendments, also known as the Bill of Rights.

This concept was very simple.

The life of the American Human or Being was an INDIVIDUAL process and that singular process must be protected.

The Right to Speak Freely without fear of persecution or prosecution from any form of government.

The Right of the Individual to believe in a higher power than themselves.

The Right of the Individual to publish and circulate the truth for public consumption.

This is referred to as the 1st Amendment also known as the Pen.

The authors of the greatest written document to Freedom understood, that if ANY of these Rights were violated, no more “discussion” need take place.

This incredible realization that removed the human fallacies of rationalization and justification created the 2nd Amendment, also known as the Sword or the greatest insurance policy known to Man.

United States Citizens, including the President of the United States have been threatened, prosecuted, and “arguably” murdered for speaking truth to power.

The IRS, FBI, DHS, and CIA have all targeted too many Americans to count.

“Secret courts” that are oppressive and unconstitutional are being used by elected and unelected members of government to crush any and all who attempt to practice their 1st Amendment Rights.

Michael Flynn is but one example.

Donald Trump was pressured, stalked, and slandered before being elected.

Members of the government even contemplated recording their conversations with now President Trump to be used as blackmail (25th Amendment) and/or Impeachment, currently happening now.

Let us not forget the admittance, explanation, and apology of one Lois Lerner.

The same Lois Lerner who is drawing a taxpayer funded pension.

While all this takes place the Justice Department continues to do NOTHING while the current House Republicans whine about “their cell phones being taken away.”

Bonnie Tyler once asked “Where have all the good men gone?”

They certainly aren’t anywhere in Congress.

The concept known as the Law of the Land requires that all in the Land follow the Law.

It’s very clear the days of following are over.

“The credit goes to the man in the arena.”

The arena appears to be forming in Washington DC.

Get ready to enter.

2 Responses to The Great Experiment is Under Attack