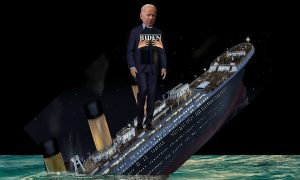 Currently in parts of California Gavin Newsom is quite unpopular as numerous Recall petitions try to gain coverage and momentum.

Of course the “majority” of Californians voted for this shell of a man to lead the State.

A man who can factually be referred to as a lying, cheating, money laundering, alcoholic drug addict and that’s just skimming the surface.

This caricature of a male hasn’t ANY experience in the medical or scientific fields but has individually shut down the California economy due to the ChinaVirus.

The same China he gave one billion dollars to for “masks” that any fifth grader knows won’t help.

The same China, that had one of their own, controlling California’s pensions for the corrupt and broke State.

Wear the masks, you are saving lives, #TogetherAlone, are just a few of the moronic things that have come from the skeptically timed Chinavirus-AntifaAttacks-BLM trifecta.

A good portion of Californians are running around with masks adorned trying to do their part to “save us all.”

Hitler would have loved all of you little Seth Rogen’s back in his day.

Of course those of us who require FACTS refuse to wear today’s yellow Jude star as we know the only thing protecting one from the reality of billions of viruses is how well one takes care of our bodies.

Mouth and nose coverings actually make human survival less likely but keep it up Liberals, maybe Social Security will be there for some of us taxpayers after all.

Now the drunken pill popping Governor of California has proclaimed that much of the data on the ChinaVirus was incorrect and things aren’t as bad as they seem.

Yet even after this, humans in California, who have Free Will, are still walking around with masks and allowing the Government to controls their lives by shutting down their businesses, churches, and places of leisure.

We all have choices to make.

Compassion is reserved for the unfortunate, not the stupid.

You’ve been told, warned, and educated.

Your next move better be better than your last move Liberals, or your cities are going to burn. . .and we are going to let them.

With that said it appears the Progressive train is completely off the rails as the Communist/Liberal Left has again hitched their Presidential wagon to a buffoon and overt bigot.

The bloom has been off the Obama rose for quite a while and it appears the rebuilding of the Obama reputation has started with the naming of Biden as his successor.

In other words the Dems are showing the world that they can indeed provide someone worse than the man who proved his love for Sharia by helicopter dropping cash and gold into Iran in the middle of the night.

The same Iran who held American military at gunpoint on their knees during Barack’s disastrous tenure.

To support Obama is to support hatred for America and to those who continue to support this traitor if/when the time comes AMERICANS will enjoy placing our knees on your necks.

You aren’t worth that much of our time.

With that said the Dems have decided to attempt and burnish Barry by offering an idiot up as a sacrifice.

In a country where skin color has overtaken everything except the donning of masks the Dems have pushed forward a man who doesn’t make one wonder about his morals.

He puts it all out there.

The two biggest punchlines in today’s political world start with Joe and end with Biden.

Without a doubt the man is sick.

No, not in a dementia way.

Joseph R. Biden is a serial molester of both women and children.

Fondling, stroking, groping other humans who do not want this attention is a crime.

Battery: An intentional unpermitted act causing harmful or offensive contact with the “person” of another.

Of course ol Joe will just fall back on his Catholic ways.

Now Biden’s predilections are widely known yet according to the media he will still receive the vote of the White Soccer Mom.

For all of you who fall into this category your gender will not protect you if/when you push America into battle.

Your necks will stretch, or more correctly snap, just like the rest of whatever liberal genders you have chosen to become.

America cannot and will not save you. . .from yourselves.

We will be too busy protecting your children from those you’ve allowed to grow and fester in your own neighborhoods.

Don’t take my word for it.

Ol Kracker Joe has been quoted twice in the last few months.

“If you vote for Trump you ain’t black.”

“And by the way, what you all know, but most people don’t know, unlike the African-American community, with notable exceptions, the Latino community is an incredibly diverse community with incredibly different attitudes about different things.”

I wish I could have been there for a follow-up question and ask “What about Hispanics Joe?”

“Are Hispanics smarter than Muslim Blacks and Catholic Latinos?”

One could only imagine the incredulous bigotry that would have spewed from this perverted soul.

Still, according to “reports” Hiden Biden will receive ninety plus percent of the unexceptional and unnotables votes.

I don’t believe this to be true but to those who actually vote for this personification of evil it appears you are not understanding what the silent majority really means.

It means you won’t hear us as we refresh the tree of liberty with your blood.

Just keep dancing on the decks.

One way or another your Titanic is going down.