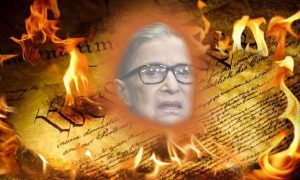 Over the years I’ve listened and read many different lamentations from Americans around the country, attempting to comprehend what makes someone vote Democrat.

Stupidity, self-loathing, stoned out of their minds?

The reason people in the country vote Democrat is Selfishness.

Dems are the classic Me Me Me concept.

The Live for the Now and You Only Live Once crowd.

Hair cuts and ice cream for piggish Pelosi but YOU have to put on a mask and stay locked down in your towns.

I could be here for hours with Hollywood examples alone, and even more time, if I applied the NBA. NFL, and MLB.

Instead I will point to the behavior of a Liberal who was so selfish, she is thankfully leaving her Party, the same way she left the world.

It is a poorly kept secret that Barack Obama wanted to replace Ruth Bader Ginsburg with a younger Progressive (see Communist) Supreme Court Justice and many members of his criminal administration applied significant pressure on Ginsburg in hopes that she would step down.

RBG’s response to her Party’s begging?

I remember hearing about this behind the scenes melodrama and I laughed as I quickly realized Ginsburg only cared about her Party as long as she was in the cat bird seat.

It’s similar to Michelle Obama stating the only time she was proud to be an American was when her husband was elected President.

It’s always all about them.

They have no concept of service or sacrifice.

They actually believe they are special, and the lives of the peons known as the Citizenry, are but a mere annoyance to them during election cycles otherwise known as you ain’t black, you ain’t gay, you ain’t a woman if you don’t genuflect to their “hairy legs” and Wakanda gear.

Of course Michelle’s never been elected to anything and Ginsburg was a token appointment.

No one with a scintilla of knowledge would ever mistake Traitor Bader for a brilliant mind.

What is fascinating about Liberals is their belief that because they are special they don’t have to work hard.

Selfishness begats laziness which describes why Ginsburg wouldn’t retire and Obama decided to not appoint anyone to hundreds of positions in the Judiciary.

He simply couldn’t be bothered to stop vacationing and she wasn’t willing to give up her position as it would lessen her stature in the world.

Due to the selfishness of these two, President Trump, who is a worker, has reportedly historically filled the courts and as hard work is usually rewarded, will have a third Justice nominated to our highest ranking bench.

You’ve been in the position for almost four years now and we are getting ready to send you back for four more.

You’ve had many successes but your appointees to the Supreme Court have been lacking to say the least.

I know you are having to use the opinions of people around you for these positions, as I am quite sure, just like the rest of us, had never before heard of Gorsuch or Kavanaugh.

I will be brief in my summation of these two.

Gorsuch is eventually going to get the “tribes” crushed as he continues to ignore the reality of what will happen when Americans are stripped of their land.

Kavanaugh is a strange, calendar keeping weeper who is easily swayed and/or intimidated by stupid humans.

For the Supreme Court to have any credibility your next choice must be an American Hammer and that hammer is named Thomas Cotton.

Once this is complete we can make one of your first priorities as a second term President removing John Roberts.

Actually you should have someone working on this now.

I guarantee former Director of the CIA and current Secretary of State Pompeo has some very interesting info on ol Johnny boy.

Yes it can be done, and if this country is going to have any chance at some type of battle not breaking out, the courts have to be filled with men and women who have ethics AND courage.

Cotton in for Ginsburg and Dr. Benjamin Carson in for little Lord Fauntleroy as a friend of once called Roberts.

We rid ourselves of a Liberal leech to be replaced by a combat veteran whose IQ trumps RBG by probably thirty points.

We then replace Obamacare Roberts with an actual medical genius, a celebrated neurosurgeon in Carson.

After this occurs we build a great big wall on the border and make Mexico pay for it while deporting forty million criminal foreign nationals.

This should be nothing for the man who is bringing peace to the middle east besides we know you like a challenge.

Cleaning up the mess Clinton, Bush, Soetoro, and McCain left behind is low hanging fruit.

You have a real opportunity to change, for the better, the lives of millions of Americans.

Let’s get these masks off, get back to work, and stop suppressing interest rates.

I don’t care that the Fed is now agreeing with you.

They are wrong and we both know this.

How do we know this?

You said so years ago. . .before you were President.

We have your back in more ways than one but you have to stop crushing the savers and devaluing the Dollar.

You are opening up the opportunity to Cryptos and that will NOT be good for the average American.

Ready when you are.