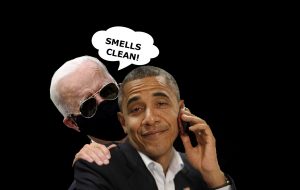 One could only imagine if the Liberals had eight.

Their brethren would be referencing the Seventies and screaming Eight Is Not Enough, we need more stimulus checks and free weed!

Speaking of a Dick the self-proclaimed “King” Lebron James ran his mouth on social media about being “literally hunted.”

This is pathetic coming from a guy worth hundreds of millions of dollars who travels on private planes with a “posse.”

Even more pathetic is a “black man” who uses the moniker of a monarch who was white and had slaves.

Look at you KING!

Naming yourself after “Whitey” and taking orders from a bigot who called your hero Barack “clean.”

Speaking of bigots a woman in New York City freaked out when she was asked to put her dog on its leash. She ranted and raved, almost frothing at the mouth screaming “racial” epithets and threats. The individual who asked her to leash her dog calmly recorded it all. The woman was attacked on social media and reportedly lost her job while other bigots joined in trying to make it a black versus white thing.

In fact the Liberal bigots attacking the white woman were attacking one of their own as her behavior was classic Progressive Privilege.

Disobeying the rules, screaming like a drunken Madonna after a Donald Trump election and then playing the race card.

While Minneapolis and Los Angeles decided to steal televisions, burn down businesses (some reportedly “Black” owned) and buildings, they apparently found a cure for Covid-19 as NO social distancing was witnessed yet not one new case of the RONA was reported.

Also in the category of things that make you go hmmm was the large number of “white” faces being recorded trashing the cities.

The last one was so bad they had to put up chained link fences to keep their “voters” out.

Los Angeles, New York City, Minneapolis all lived up to their Liberal expectations.

My only question is What’s up Detroit!

In between the rioting and the looting, Liberal mouthpieces across America aimed for the title of biggest idiot.

As I was saying the Cuomos had the lead but Hank Guam May Tip Over Johnson strode to the front.

What did he say?

He opened his mouth, after that it’s all a disaster.

Ol Hank is the poster child for why Democrats should all wear the RONA mask . . . forever.

Still, the hater of Free Speech amazingly wasn’t the worst of the week.

While Libs were begging for more debt, screaming about racism and destroying their own neighborhoods, one politician stepped up and said, “Hold my beer.”

San Francisco Mayor London Breed continued to lead the way of the decrepit, disillusioned and downright dumb by supplying the homeless population with drugs, alcohol and “smokes” and then proclaimed the city to be locked down “indefinitely.”

What did the Liberal citizens do?

I could go on and on with the ridiculousness coming from the Communists, err, Left, but why bother.

I don’t care about them anymore.

Haven’t for a while yet for the slowest of the slow let us reassert the Liberal’s Logic.

“Black Men are being hunted and murdered in the streets every day!”

The facts are these.

If we are going to “color” people then yes more black men do die every day per capita than any other color.

Every day across America black men assault and kill other black men.

Every day across America black men assault and kill more “blue men and women” (law enforcement) than the other way around.

This is pretty cute coming from a guy who gets paid by a company that lives on Chinese child abuse/labor.

Pick up a weapon then Hamas supporter and make a play but you’ll have to get off your knees first.

You may want to work on your aim as well as we all know your receivers hated you.

Yet, Progressive cities are collapsing, crumbling and quarantined and their voting population says, “We Want Aviator Glasses Joe!”

Now we are hearing the bigoted “Black Lives Matter” again.

No ones life matters because of the proximity to the Sun of their ancestors.

Your life only matters if you are beneficial to others.

Stealing cigs, 40s of Olde English and apparently Legos isn’t benefitting anyone including you morons doing the pilfering.

Yet here we are once more.

Maybe Hillary or Brian Williams could give us a repeat performance of their fictional tales of having to take cover while “under fire.”

Too school for cool.

Wait Jason, isn’t that the other way around?

They be a difference?

Welcome to the Twenty-First Century.

Where children congregate on curbs, smoking herb, rather than conjugating verbs.