Was GOP Video Cut Off at Barr Hearing? 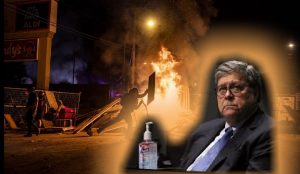 If you were watching the House Judiciary Committee hearing which was intended to question Attorney General William Barr yesterday, you’ve learned a few things.

Democratic Representatives enjoy reclaiming their time. As a matter of fact, they ask questions without wanting to hear the answers.

Democrats stopped Barr from answering several questions by reclaiming their time. It appeared that they never intended on giving Barr any time to explain himself.

Representative Jim Jordan R-OH., the top Republican, showed a video of so called peaceful protestors, rioting, setting fires, attacking law enforcement and looting but Chairman Jerrold Nadler D-N.Y., cut it off before it was shown in its entirety.

The ten minute video was cut off about two minutes before its conclusion.

Nadler said that the video was out of order. He went on to say that Republicans had not provided adequate notice that they were going to play it and criticized its length.

Well this video is available, so far, because you never really know how long it will take before a video will be available until it is zapped from view.

When Democrats, along with Internet moguls and the mainstream media don’t want something shown, it’s taken down.

Here watch this video before someone removes it.

I write for http://DefiantAmerica.com, http://aleadernotapolitician.com/ https://magamedia.org/ and http://FreeAmericaNetwork.com & Graphic Artist & Video producer. I adore journalism. Politics seems to be my preferred genre although I do not hesitate to write anything that strikes me as interesting. Researching and finding 'Breaking News' makes my blood rush. I've written seventeen books. and over that including books in conglomeration with others. Doing graphic art design has always been fun for me. Sometimes I incorporate this talent into my articles or when a special 'feature picture' is required. You can find me tweeting on: https://twitter.com/DavedaGruber You can always find my articles on the sites I write for.
View all posts by Daveda →
Tagged Jerrold Nadler, Jim Jordan, William Barr. Bookmark the permalink.