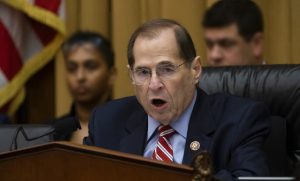 Jerrold Nadler D-N,Y., who is the Chairman of the  House Judiciary Committee, is willing to let the Foreign Intelligence Surveillance Act (FISA) expire.

Nadler canceled Wednesday’s hearing on reforming a FISA bill because Democrats are divided on the issues at hand. The legislation was expected to pass the Judiciary Committee but lawmakers can’t agree on how to reauthorized the program. Essentially, it would expire in ten days, which would fall on March 15th.

Nadler favors a major overhaul to the surveillance program and is the product of talks between Nadler and Representative Adam Schiff D-CA.

The surveillance program gives the government authority to wiretap and electronically skim information between foreign entities and those inside the U.S. which would be in the interest of national security.

Inspector General (IG) Michael Horowitz reported errors and flaws which occurred in the application in the Foreign Intelligence Surveillance Court (FISC) to eavesdrop or spy on former Trump campaign aide Carter Page. This was an integral part of the FBI’s Russia investigation.

Concerns about FISA is shared with Republicans and Democrats. Alleged abuses were uncovered in the Russia investigation and to make matters worse, the Trump administration is struggling to fill a vacancy for a new director of National Intelligence.

President Trump has gone out on a limb and criticized government intelligence agencies and  accused them of abusing their authority in an effort to spy on political opponents. He has demanded major reforms before he will pass a reauthorization.

Not reaching a conclusion on the issues would interrupt surveillance operations conducted by the FBI and the National Security Agency (NSA).

Democrats have been accused by Republicans who are advocating for changes, of tabling  discussions in an attempt to prevent changes from being made.

Republicans are divided on this, as well. There are some who want to renew FISA with minimal changes and then later on tackle significant reforms.

The Senator from Kentucky, Rand Paul R-Ky., is one who opposes FISA but he has opposition from Attorney General William Barr and Senate Majority Leader Mitch McConnell, R-Ky.

Personally, I don’t like the idea of Americans being under surveillance but I do like that foreigners can be surveyed.

This issue always takes me backed to September 11, 2001. What if we had surveyed the terrorists? Could that have stopped the attack on the Twin Towers? I’m not certain of the answer to my own question but I don’t want to give up my freedom. But if my own phone records and whereabouts could have stopped so many untimely deaths and the aftermath health issues, would it be worth it?

I’ll let my readers answer. Would you give up what you had in freedom rights to insure that foreigners could be spied upon?

I write for http://DefiantAmerica.com, http://aleadernotapolitician.com/ https://magamedia.org/ and http://FreeAmericaNetwork.com & Graphic Artist & Video producer. I adore journalism. Politics seems to be my preferred genre although I do not hesitate to write anything that strikes me as interesting. Researching and finding 'Breaking News' makes my blood rush. I've written seventeen books. and over that including books in conglomeration with others. Doing graphic art design has always been fun for me. Sometimes I incorporate this talent into my articles or when a special 'feature picture' is required. You can find me tweeting on: https://twitter.com/DavedaGruber You can always find my articles on the sites I write for.
View all posts by Daveda →
Tagged FISA, Jerrold Nadler, Rand Paul. Bookmark the permalink.