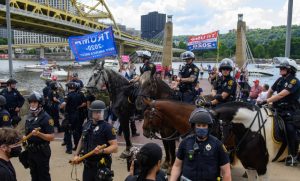 Do you support law enforcement or do you want to defund the police?

There are some people who have a very strong stance on the matter.

Retired law enforcement officers have formed a coalition and they banded together and formed the Protect Our Police PAC that will give support to pro-cop political candidates who are running for election.

The group that is also known as POP PAC, is based in Philadelphia. It was launched on Wednesday and they are raising funds to put towards endorsed pro-police candidates.

In a press release the group said that funds will be put towards independent expenditures for paid communication programs and media plans.

The release clearly states, “As spineless elected officials turn their backs on cops, POP PAC will elect law & order candidates in their place.”

Anti-police rhetoric, protests and calls for the police to be defunded are referenced.

The POP PAC press release also describes how it will be “the largest organization exclusively committed to providing the resources needed to elect candidates who will support our police officers, law enforcement and first responders while in office.”

The release goes on to say, “POP PAC will build the largest coalition of pro-police groups, organizations, unions and lodges in the country to fight to protect our police on the front line who selflessly risk their lives every day. POP PAC will also promote pro-police stories often ignored by the mainstream media.”

POP PAC has already received contributions from Philadelphia Fraternal Order of Police Lodge #5. It is encouraging candidates to apply for endorsement through its candidate recruitment program.

Four retired Philadelphia police officers are on the PAC’s board. They have been on the force between 12 and 20 years each.

They have a website that describes how police are “under attack.”

This was tweeted today:

The recent anti-police language began after the May 25th death of George Floyd, who was a Black man, and died when a white officer held his knee on his neck for nearly nine minutes in Minneapolis, Minnesota.

Floyd , while being held down, said 17 times that he couldn’t breathe. That caused protests to erupt across the nation.

There are other cases where tension started to rise within some members of the public.

One such instance happened in March in Louisville, Kentucky when police shot to death Breonna Taylor, who was a Black emergency medical technician, while a no-knock search warrant  was executed.

I personally do not believe in defunding the police. Our society and culture needs law enforcement. People must respect the rule of law and those who enforce it.

A country that thrives on crime is not what we, as Americans, need.

People who “Back the Blue” may want to visit the website here:

You can Donate here: