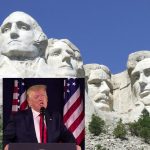 by Daveda Gruber:
Last night many Americans had the privilege to watch and listen to President Trump in South Dakota in the shadow of the beauty of Mount Rushmore.

As the President stood and spoke, many thought that this was his best speech since he became our President.

There had been concerns that Mount Rushmore could be destroyed because of the efforts from radical domestic terrorists to take away our history by removing statues and monuments that these anti-Trump people feel make them feel offended.

In his speech Trump vowed, “This monument will never be desecrated. All of those found guilty of defacing statues and monuments will face ten years in prison. The party’s over for lawless and destructive street anarchy.”

Trump went on to say, “This movement is openly attacking the legacies of every person on Mount Rushmore. Those who seek to erase our heritage want Americans to forget our pride and our great dignity, so that we can no longer understand ourselves or America’s destiny. In toppling the heroes of 1776, they seek to dissolve the bonds of love and loyalty that we feel for our country, and for each other.”

Last night’s kickoff for July 4th celebrations included a spectacular fireworks show over Mount Rushmore, which has not been done for a decade because of the possibility of wild fires.

Apparently, the risk has been diminished throughout the years. There were no reports of wildfires burning in the Black Hills the morning after.

I felt that the spirit of Independence Day was delivered with grace and strength by a man who came across as a real leader of the greatest nation in the world.

In essence, our President may have given the most expressive and high spirited speech of his presidency. I truly believe that he gave new meaning to the importance of Mount Rushmore and to

On the July 4th 2020 weekend, a renewed passion released patriotism within the American people and the sky up high at Mount Rushmore.