Beto Doesn’t Want Your AR-15: He Just Wants Your Semi-Automatics 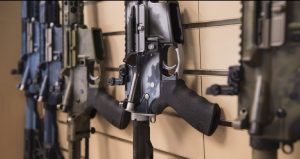 The Sanctuary State known as California has cost another American life.

Reportedly, two “Mexican Nationals” murdered an El Dorado County Sheriff’s Deputy this week as the Deputy and his ride-along from another County answered a call that led them to a marijuana growing outfit.

Gavin Newsom’s answer is to continue to provide them everything including now free legal counsel.

Yes, this is the same Mexico that just rolled over to the cartels, and released an arrested criminal, for fear of losing their own lives.

Mexico. . .the gift that keeps on taking.

Liberals, some Independents and stupid RINOS ran around telling anyone that would listen that they’d vote for the Bernie Sanders acolyte if she was the Democratic nominee for President.

A vote for surfboard Tulsi is a vote for an open border that is murdering our citizens, government run programs that have already failed, and ANTIFA but hey she has a “nice smile” so let’s give her the nuclear codes.

Maybe Eric Swalwell can explain to her how the government has “nukes”.

John Durham announced that the Russian Collusion Delusion has now turned into a criminal manner.

Thanks for clearing that up John.

It’s nice to hear that secret courts, racketeering, and TREASON can finally be called criminal.

Of course many cheered as this most obvious and ridiculously late statement was made, but until someone actually gets indicted anyone counting on Bill Barr and the Justice Department is setting themselves up for a very Jeff Sessions-like moment.

This is one of the few times I’d LOVE to be wrong but sadly it wouldn’t surprise me in the slightest to watch Durham do nothing.

What we are witnessing in real time is the collapse of the United States Federal Government.

Crushing debt, suppressed interest rates, and the invasion of tens of millions of Criminal Foreign Nationals has left Americans with few peaceful options.

The aforementioned California is only an extended power outage away from citizens having to band together to keep the record amount of felons being released into her cities on a daily basis, under control.

Due to Law Enforcement being overworked and under constant threats of indictment from the Liberal Left, many have taken a step back to ensure their own survival.

Feces, urine, hypodermics, rape, and disease are running rampant on the streets of the Golden State’s major cities.

Tax the rich, take the guns, and impeach Donald Trump.

Yep that should definitely stop the Plague that rat infested Los Angeles is currently not dealing with.

Speaking of guns I had a Liberal write me a comment.

So basically Hitler didn’t want to kill the sons and daughters of Abraham.

He just wanted to kill the Jews.

I will say this.

I do believe that I am now becoming a proponent of “Late-Term Abortion” with a catch.

We need to Constitutionally define Late-Term.

It’s starts with being a Progressive and begins at the age of thirty.

One hundred percent taxpayer funded with a “public option” to bring a friend.

Tagged #aleadernotapolitician.com, #FreedomFirstFreedomOnly, jason kraus, One voice at a time, Shoulder to Shoulder. Bookmark the permalink.

2 Responses to Beto Doesn’t Want Your AR-15: He Just Wants Your Semi-Automatics