Brother of President Trump Dead at 71 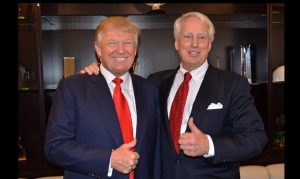 It is a sad weekend for President Trump and his family. Robert Trump, the president’s younger brother, has died.

Robert Trump was eleven days shy of his 72nd birthday when he passed away.

A statement from President Trump was released and stated, “It is with heavy heart I share that my wonderful brother, Robert, peacefully passed away tonight. He was not just my brother, he was my best friend. He will be greatly missed, but we will meet again. His memory will live on in my heart forever. Robert, I love you. Rest in peace.”

Trump had visited his brother in New York on Friday. Robert had been ill and it had been reported that he had spent more than a week in the intensive care unit at Mt. Sinai Hospital in New York City earlier this summer.

Robert Trump is the youngest of the five Trump siblings. Maryanne Trump Barry, 83, is a retired federal judge; Fred Trump Jr., died in 1981 at the age of 43; Donald, 74, who is in the middle; Elizabeth Trump Grau, 78, is a retired bank executive, and then Robert.

Robert Trump wasn’t in the public eye but he did have a high-profile divorce in 2008 from his wife of 25 years, socialite Blaine Trump. Robert Trump was said to be having an affair with his secretary, Ann Marie Pallan. He lived with her later on. Robert and Blaine stayed on good terms and Blaine  attended President Trump’s inauguration in 2017.

The youngest Trump sibling joined the family business and was a top executive at the Trump Organization but was retired and living in Millbrook, N.Y.

He used his fortune to support a number of local causes and small businesses. He was a trustee of Angels of Light, which is a holiday giving nonprofit. He had also donated a significant amount to a horse rescue operation in the area, among other causes.

I’d like to send my deepest condolences to President Trump and the entire Trump family.

I write for http://DefiantAmerica.com, http://aleadernotapolitician.com/ https://magamedia.org/ and http://FreeAmericaNetwork.com & Graphic Artist & Video producer. I adore journalism. Politics seems to be my preferred genre although I do not hesitate to write anything that strikes me as interesting. Researching and finding 'Breaking News' makes my blood rush. I've written seventeen books. and over that including books in conglomeration with others. Doing graphic art design has always been fun for me. Sometimes I incorporate this talent into my articles or when a special 'feature picture' is required. You can find me tweeting on: https://twitter.com/DavedaGruber You can always find my articles on the sites I write for.
View all posts by Daveda →
Tagged Robert Trump President Trump. Bookmark the permalink.